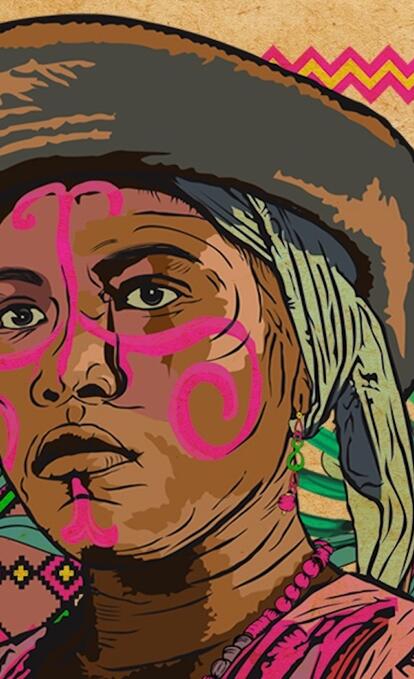 RESISTING. The Wayuu people hold on to the dreams and advice of wise people and traditional authorities.

Irene Katherine Jayariyu Ipuana, 27, an indigenous weaver from Alta Guajira, Colombia, holds on to her beliefs to keep safe from the emergency due to the coronavirus. Confinement measures have halted handicrafts sales. She now raises her voice from one of the poorest regions to demand water and food. This is her story as part of the journalism series “They Fight” by OjoPublico in 7 countries in Latin America.

In Siapana, a region in Alta Guajira, far north Colombia, the Wayuu, the largest ethnic group of Colombia and Venezuela, prevent the COVID-19 pandemic with the yonna ritual dance (which is performed to ward off the evil spirits and in celebration and healing ceremonies) and with medicinal plant baths. They follow the message of a dream (lapü) that an elderly woman of the community relayed to them to resist the emergency that has paralyzed the world.

Irene Katherine Jayariyu Ipuana, 27, mother of a 4- and a 6-year-old girls, lives in one of the 48 communities of Siapana, located 8 hours from the Uribia community. Just like the 90% of the indigenous people of Wayuu, she sustains herself from the sales of Wayuu bags and hammocks.

As 90% of the Wayuu, she lives by selling fabric for bags and hammocks.

Wayuu’s lives depend on handicraft. Weaving is a part of their culture and worldview. Girls learn to spin and weave when they are very young. With needles and colorful yarn, they express what they feel for life, harmony, and their dreams. Irene leads Coarwas, the Multiactive Wayuu Artisans Cooperative (Cooperativa Multiactiva Artesanias Wayuu,), where 40 women take part. All of them craft bags and purses, which they sell both inside and outside the country.

Irene Jayariyu sells a bag —one of the best-known and sought-after objects— in 150,000 pesos approximately (about $38). It is barely enough to buy food. With many other families, she lives on bare minimum, but now, there is not enough money for essentials. Sales have stopped since the government announced the mandatory self-isolation measures on March 24.

“Everything is closed, there is no transportation; everything is expensive. We are very worried, we do not know how we are going to feed ourselves,” she says in distress.

Irene says that her products were also bought by tourists who visited the beach, the desert and dunes, exotic places in their ancestral territory, mostly surrounded by the Caribbean Sea.

However, ever since the borders closed and flights were suspended, “we are alone,” she says. Even the products offered in Instagram have been cancelled.

The Wayuu people are the largest indigenous population in Colombia: 380,000 people.

This national emergency adds to the humanitarian crisis that the Wayuu people were living due to the lack of water and food. This group displays the highest rates of extreme poverty in Colombia. For example, in Uribia, the community where Irene comes from, poverty reaches 92%. The situation worsened with the return of thousands of people from the same ethnicity settled in Venezuela. These people have emigrated to La Guajira since 2017, running away from the crisis in the neighboring country.

“As such, our life was already difficult to begin with. Children have starved to death. Right now, the jaguey (water wells) are dry.” And on top of everything, now we are thirsty. Irene claims that they have no water to wash their hands following the recommendations against this disease. Neither do they have money to buy masks.

Meanwhile, they are asking the government not to forget them. They claim for any kind of help, like food or hygiene and sanitary products. “The only thing left to do is to demand them to send us food. The Ministry of Internal Affairs has forgotten about these families, we are expecting something from them. Our hands are tied; we do not know when this is going to end.”

Among Colombian indigenous peoples, there are 4 cases of COVID-19 and 591,000 families are at risk.

In the meantime, regional and national governments have provided allowances, food, or food supplies to families in high vulnerability. However, “Alta Guajira has received nothing,” Irene explains.

Several Wayuu communities, in different areas of La Guajira, conduct donation campaigns in social media. Others have taken the streets to claim for help, some women exchange their handicrafts for food.

In Colombia, the National Institute of Health informed that, by April 17, 2020, there were 3,439 people infected by COVID-19 and 153 deaths. The Territorial Monitoring System of the National Indigenous Organization of Colombia (Organizacion Nacional Indigena de Colombia, ONIC) reported that there are four cases in indigenous territories, and also warned that 591,000 families are at risk due to the pandemic.

Wayuu people know that they must confine themselves like other 48.2 million Colombians. They hold to the dreams and advice given by wise people and traditional authorities.

Thus, Wayuu women dance the yonna with their red mantles to be protected. They bathe and drink using malua (Palo Santo tree) and alouka (Canella tree) that grow in the highlands of La Makuira. They also place the stems at the door of their ranches to ward off illnesses. From their arid land, they face this new crisis with dignity and resilience.