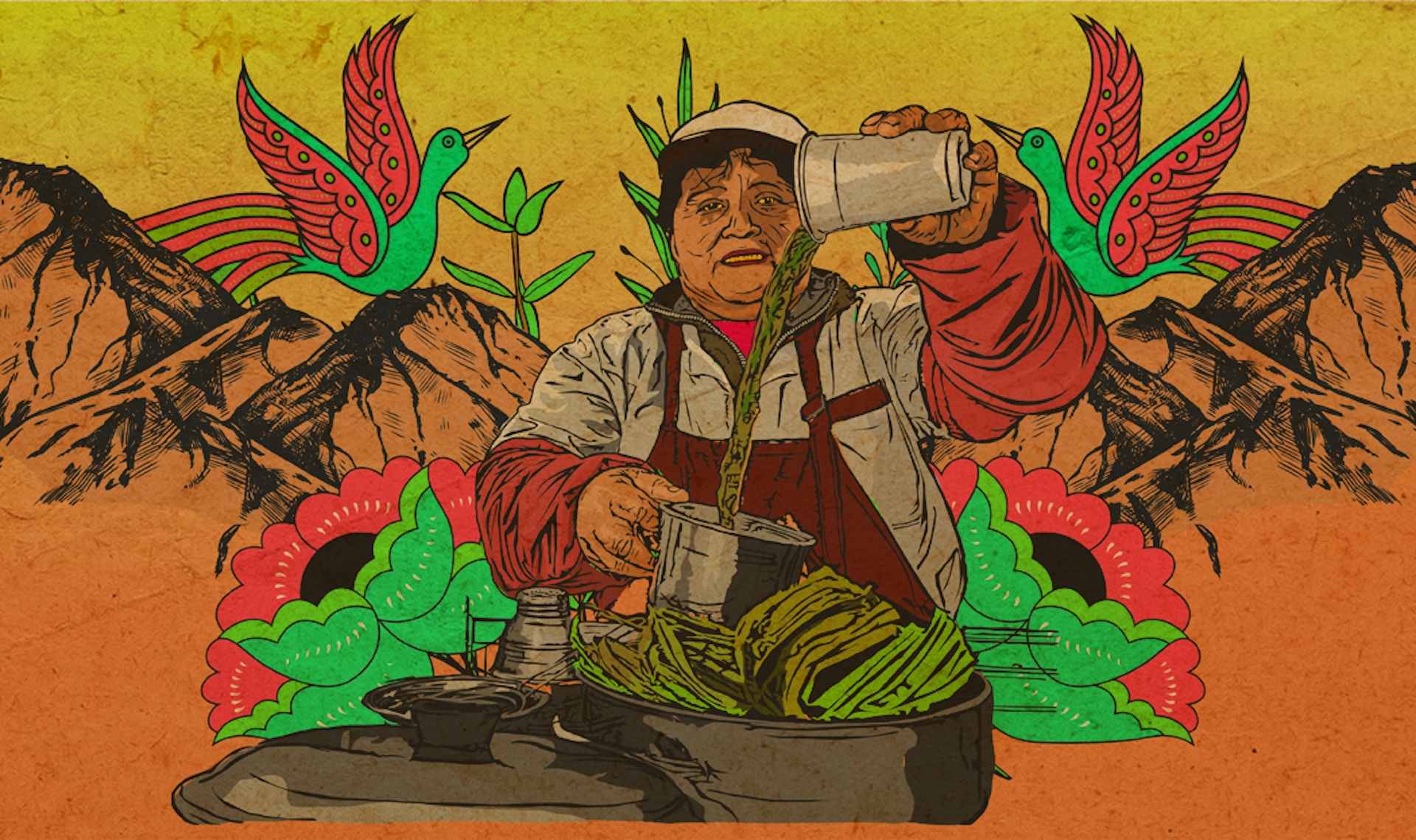 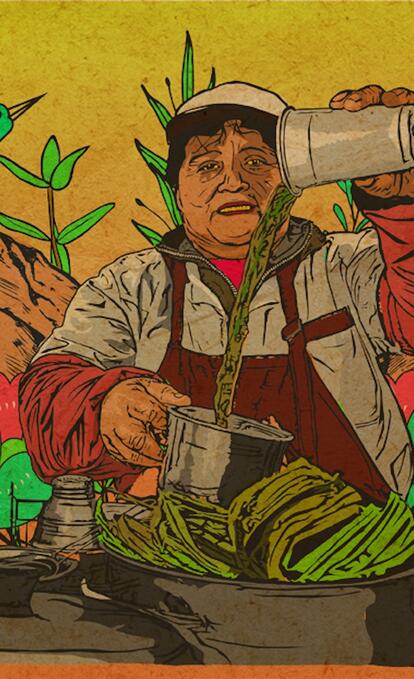 VULNERABLE GROUPS. In Apurimac, 87% of the population has informal jobs.

Throughout Peru, there are 1,483,084 people who live in Quechua communities. Apurimac is one of the regions with more people who identify themselves as members of Quechua people. Since 87% of jobs are informal, restrictive measures against the pandemic affect lots of families economically. This is the story of Madai. She is a mother like the other 6,786 women who raise and educate their children by themselves in that region.

Achachaw is a Quechua interjection that means “How scary!”

This is the most used word by Madai Rodriguez Osorio, a 40-year-old woman who kindles the firewood stove every day for preparing sweet quinoa beverages as breakfast and salty quinoa stew as lunch despite her asthma. She cooks soup one day and a main course the other. At night, she prepares mazamorra (pudding) or eats lunch leftovers, but it has been quinoa most of the time for almost a month.

She blows the fire, gets tired, coughs, breathes, and cooks for herself, her daughter, who is about to turn the legal age (18), and her 3-year-old son. A few days before the announcement of national emergency due to COVID-19, Madai bought an arroba of quinoa (approximately 11 kg) as an ingredient for cooking the breakfasts she had been selling for more than 10 years in a street of Andahuaylas province, in Apurimac’s highlands, one of the regions with the largest Quechua population in Peru.

There are currently 55 indigenous peoples living in Peru: 51 from the Amazon and 4 from the Andes. The Quechua people are the most important community of the latter group due to the number of people who speak the language. Throughout Peru, the population of the Quechua people is estimated at 1,483,084 people, as shown in the results of the national census in 2017. Moreover, they represent the sector of the population with the lowest income and the most unequal access to basic services.

In Apurimac, 87% of the economically active population has informal jobs, according to the Ministry of Labor. This figure includes Madai. Since mandatory isolation was announced, she is no longer able to go out to sell, so she cannot get the S/20 or S/30 (approximately $6 or $9) per day as before. She would go to bed at eight at night and get up at two in the morning, prepare breakfast, and, by four, she was already selling hot quinoa beverages. “I used to carry my baby on my back while pushing my food cart. Sometimes, when he fell asleep I would put him under my cart and tuck him.”

In Apurimac, 87% of the economically active population has informal jobs.

Madai used to work on her feet for six hours a day. She would later return home to cook and go to the market in the afternoon to buy ingredients for the following day; she would eat dinner afterward and go to bed early. This used to be her everyday routine. However, everything is different now. She says she no longer sleeps at eight: “Having no money keeps you awake at night.”

She used to rent a room, but eight years ago she bought a plot with 150 other people, members of the Association of Relatives of Victims of Terrorism (Asociacion de Familiares Victimas del Terrorismo, AFAVIT).

“I had no electricity or water back then. I used to walk around with a candle. I looked like a soul in pain.” She has had these basics services for three years now and has built her home through bank loans. The silence of the curfew these days reminds her of her childhood in Pampachiri, whose name in Spanish translates as “pampa fria” (cold plain), when terrorist violence threatened her district located over 3,000 meters above sea level.

As Madai, 6,786 women raise and educate their minor children by themselves in Apurimac.

In those years, “the night would fall and we would run away with a flashlight every time the dog barked. That has me traumatized. Achachaw, I do not even want to remember that,” says Madai.

Madai moved to Andahuaylas to study cosmetology, but could not complete her studies because she got pregnant at the age of 23, and then, she divorced. “I would rather be at peace, alone. When there is no understanding, there is nothing you can do. We cannot tolerate that. When you understand each other, you live happily. It is not possible the other way round. I can do this by myself.”

According to the information provided by the National Institute of Statistics and Informatics (Instituto Nacional de Estadistica e Informatica, INEI), 6,786 women are in the same situation as Madai and raise and educate their children by themselves in Apurimac.

Madai has heard on the radio that people with other illnesses are more likely to be hospitalized for COVID-19, she is scared. Besides suffering from asthma, she was diagnosed with hyperthyroidism five years ago.

Madai did not receive the government benefit of S/380 (approximately $107), nor is she a beneficiary of any government assistance program.

At that moment, she borrowed S/500 (approximately $141) to travel to Cusco and get a health check because there is not a full-time endocrinologist in the province where she lives. Now, she takes a pill daily and spends S/30 (approximately $13) each month on medicines.

Other usual words (more like questions) Madai repeats are: “What am I going to do? How? Where will I go? I do not go out because of the virus. I cannot do anything but obey. People are being arrested for going out, and I am also scared of that.” Even though quarantine “caught her in poverty,” as she says, she agrees with Government measures because she thinks they are necessary.

Madai did not receive the government benefit of S/380 (approximately $107), nor is she a beneficiary of any government assistance program. “If you earn money day to day, you get desperate when you have none. (...) I wonder how many people are in the same situation,” she asks herself. It is the same uncertainty faced by thousands of people who have been without any source of income since quarantine started in Peru over a month ago.

Sometimes, during these days, Madai goes to a store nearby and buys products on credit. She plans to work on whatever she can to pay that debt once the lockdown is over. She laughs loudly as she remembers that after much insistence she finally got her seller’s permit for selling breakfast on the streets: “I went to the municipality every day and the man who worked there told me ‘How awful! I am sick of this woman! Ok then, keep selling there.” What would have happened if I had given up? That is why you have to insist until you achieve what you want. It is the same now, when all of this is over I will be fine. I have to fight for my children.”

In Apurimac, since the national emergency was declared, fourteen Quechua communities have blocked access to their territories.