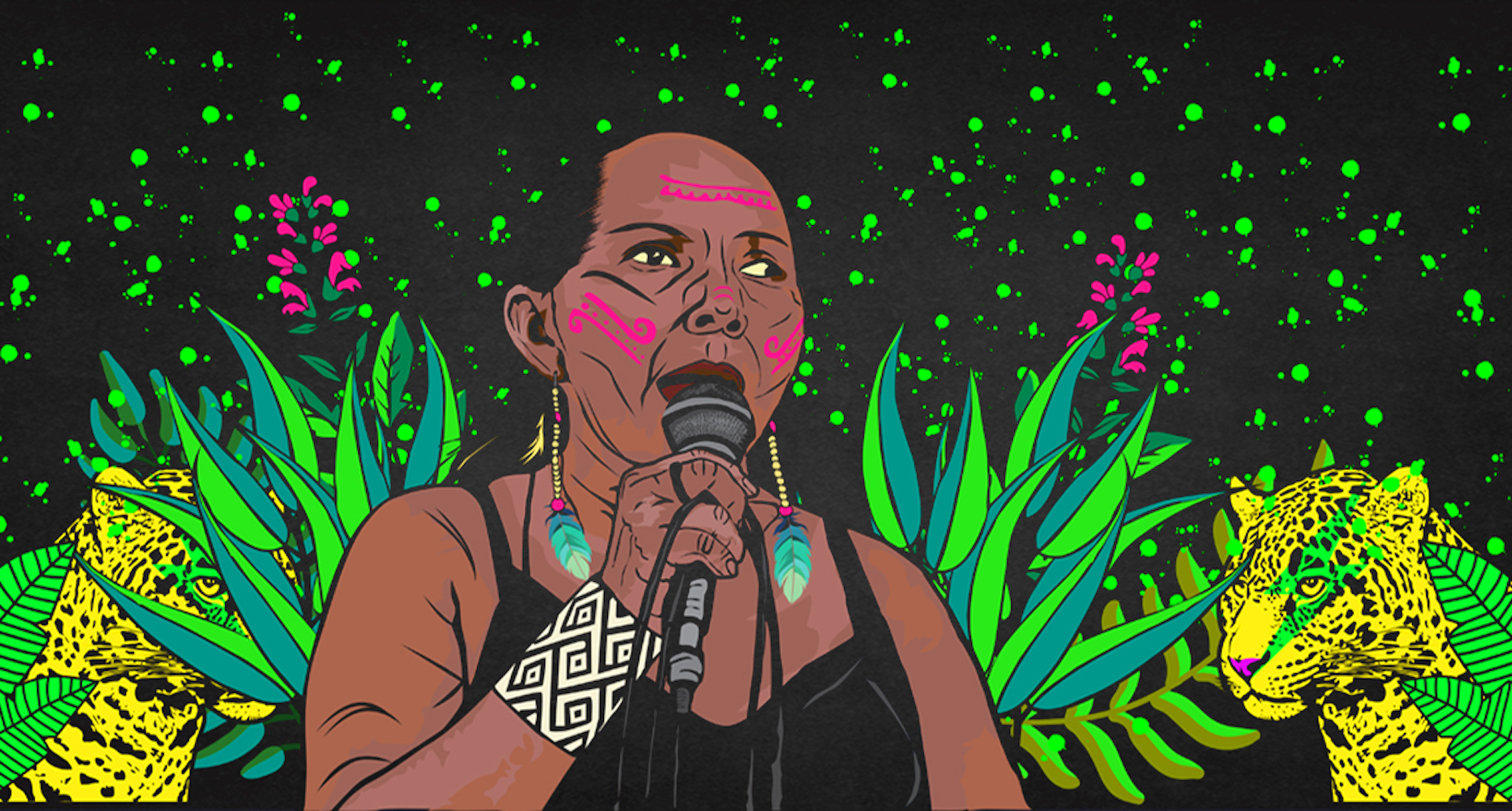 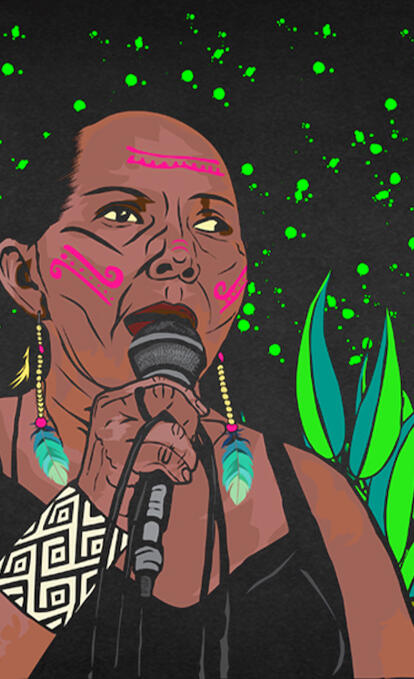 Elizângela prepares the women of the Amazon against the pandemic

Elizângela prepares the women of the Amazon against the pandemic

In Brazil, 27 members of different indigenous peoples have been diagnosed with COVID-19. Six of them have died. Elizângela da Silva, leader of the Baré ethnic group, explains the way isolation complicates access to hospitals for indigenous people and how it has suspended programs against gender-based violence. She also mentions that it is time to revalue traditional work, such as the one midwives do. This is her story, a part of “They Fight,” a journalism series coordinated in five Latin American countries by OjoPublico.

In Sao Gabriel da Cachoeira, the community with the largest number of indigenous inhabitants in Brazil and located near the border with Colombia and Venezuela, there are no confirmed cases of COVID-19 yet. Nevertheless, the impacts on daily life, and especially on indigenous communities, are starting to show.

In Alto Rio Negro, at the northwest of the State of Amazonas, which includes other cities and towns, there are 22 ethnic groups. The largest variety of indigenous lands in the country is here. There are nine territories (12.4 million hectares) with 750 communities. Elizângela da Silva, leader of the Baré ethnic group, lives in one of these communities.

The health crisis caused by the new coronavirus reminded her of the difficulties she faced six years ago when she had to leave her village to live in the city. Elizângela da Silva told Infoamazonia that it was hard for her to adapt to that new world. Her three children could not follow their classes in Portuguese because they had been studying Nheengatu, the language spoken by the Brazilian Amazon Indians. For three years they did badly. She had to hire a private teacher, even with the little money she had.

In the Amazonas State, where Elizângela da Silva lives, there are 22 ethnic groups. The largest variety of indigenous lands in Brazil is located there.

It was 2014 and she had left the village where she lived in the Alto Rio Negro Indigenous Territory to move to a community of 45,000 inhabitants, near the border with Colombia.

Now Elizângela da Silva is 36 years old. She helps other indigenous women living like her in the urban area to prepare for the restrictions imposed by the new coronavirus pandemic. “We need to spend more time with the children,” she explains, emphasizing the sense of community as a trait of resistance in indigenous culture.

A battle against gender-based violence

Since 2016, Elizângela has been the coordinator of the women's department of the Federation of Indian Organizations of the Negro River (Federacion de Organizaciones Indigenas del Rio Negro, FOIRN). Her path to becoming a leader began in the communities, when she came to be a teacher in 2008. Since then she has earned a degree in sociology and a specialization in indigenous education.

Her knowledge places her at the forefront of the fight for women's rights and against gender-based violence in several villages and in the city of Sao Gabriel da Cachoeira itself. Now, there are more police reports from indigenous women in the community, but before, she says, the information was incomplete because the records did not include data about the victim’s ethnic origin.

The sense of community is a characteristic of indigenous culture resistance. In Brazil, about 170 indigenous languages are still being used.

“We were making great progress against violence and public security until the pandemic arrived,” Elizângela says. A public hearing about child sexual abuse and harassment was going to be held, but it was canceled. “Now we are trapped in a deadlock,” she complains.

This week, 27 members of different Brazilian indigenous peoples have been diagnosed with COVID-19 and 6 have been reported dead. Most of the cases were reported in Amazonas. In Manaus, the state capital, a field hospital for indigenous people is being built and a special federal contingency plan has been announced to bring health services to them.

But what worries Elizângela da Silva the most is the interruption of her work and how the restrictive measures now prevent her from bringing information to the communities in the local language. “This crisis has changed our daily routine,” she says. She regrets not being able to meet with her colleagues; a multidisciplinary health team that visits the different communities. Her team works and spreads information in four indigenous languages: Tukano, Baniwa, Nheengatu and Yanomami.

The women not only promote topics like health, but they also encourage climate change debates among indigenous people. On the other hand, according to them, the problem is also that the women of the community will not be allowed to go to the city and, therefore, they will not have access to hospitals. Elizângela says that this will be the time to appreciate, for instance, the midwife’s work. However, she is concerned about the lack of information.

As there is no internet connection in the communities, there is no WhatsApp. In the region, there are radio programs that share information through podcasts. Even Boletin Audio Wayuri, produced by FOIRN, is available on platforms like Spotify. Nevertheless, in order to access these programs, they must download them before, when they visit the urban centers.

The difficulty of being isolated

In some areas, isolation measures are causing some energy and fuel shortages. As there is no permanent transport system for traveling any more, the boats that used to go up Rio Negro and its tributaries no longer arrive with fuel or gasoline. This shortage could cause a misinformation crisis because if the electricity generators are shut down, there is no energy for radios or television.

The mobility of indigenous people is added to the lack of communication in the area. There are some people who live near Colombia, for example; others near the border with Venezuela. Elizângela complains about the lack of action from the governments of all bordering countries. In her opinion they do not take into consideration the territorial situation of indigenous people. “My relatives keep arriving. Often with no knowledge of the seriousness of the situation in the urban centers,” she says.

There are problems with fuel supply and, since the energy generators are shut down, there are no radios to inform people.

However, newcomers cannot be easily isolated. “We cannot self-isolate, our house has no rooms; everyone shares the hammock. We live for the community. The pandemic took us by surprise,” says Rio Negro’s leader.

Experts warn about the vulnerability to COVID-19 of this region’s indigenous people because 10% of villagers are over 60 years old, which is considered a vulnerable group to this disease.

A specific measure, already adopted by indigenous people, was to publish informative pamphlets about the new coronavirus. These were produced in partnership with Instituto Socioambiental in Baniwa, Daw, Nheengatu, and Tukano, for health professionals of the Special Indigenous Health District of Alto Rio Negro to take to indigenous lands of the region. A Portuguese version was also produced specifically for the Hupd’ah people, recently contacted.