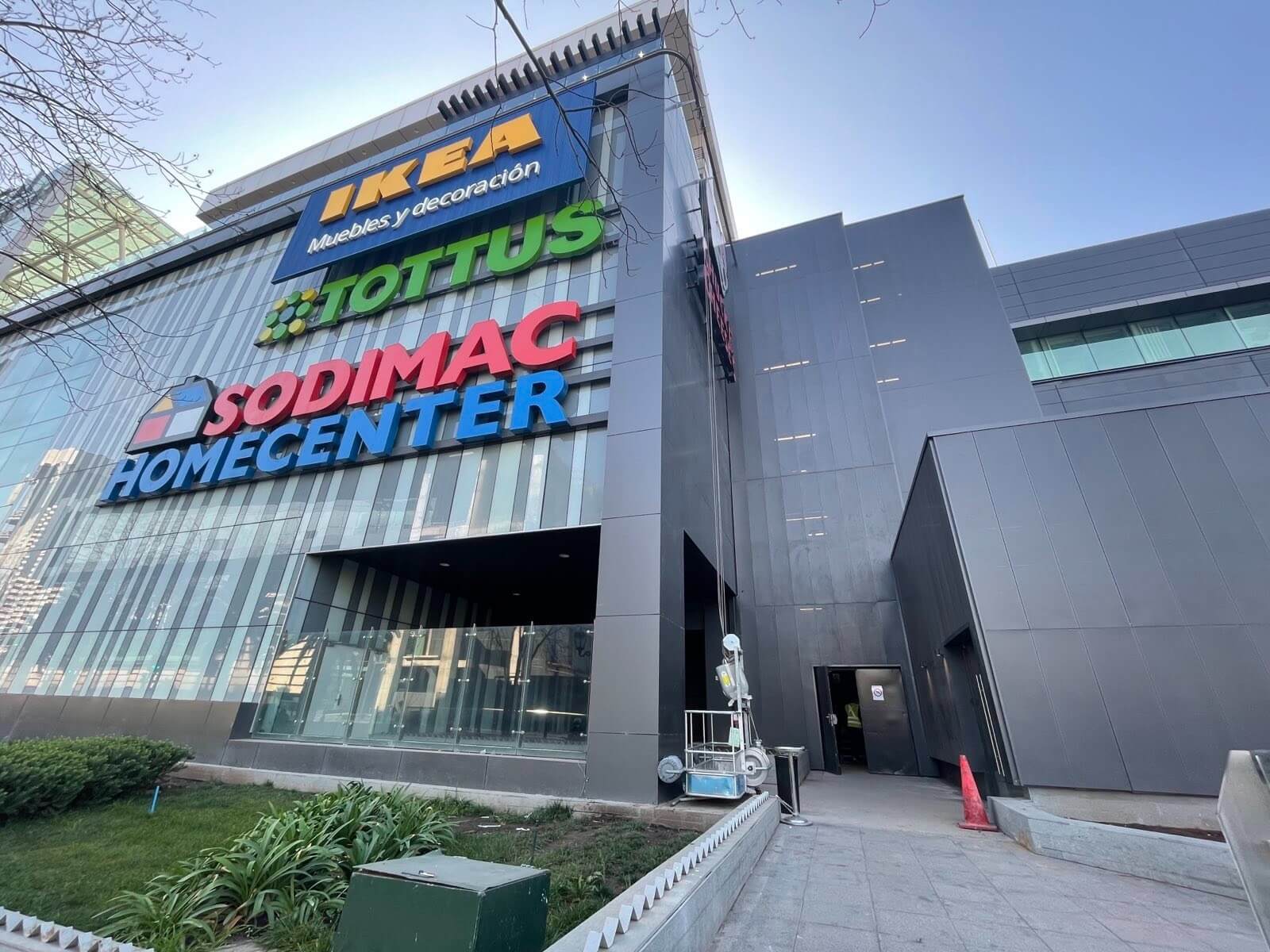 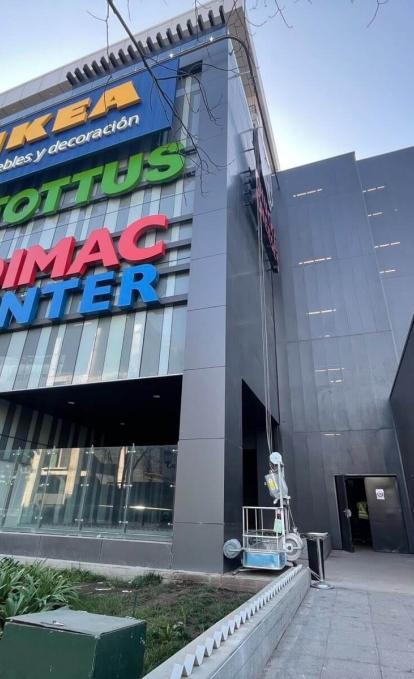 EXPANSION. The first Ikea's store in Chile was inaugurated last august, and it is scheduled to open more stores in Perú and Colombia.

Ikea’s arrival in the region raises uncertainty about the origin of the wood used to make its design furniture; Falabella, who manages the Swedish brand’s stores in South America, has increased imports of Brazilian wood as it prepares to open new stores in Chile, Colombia, and Peru.

Ikea’s expansion, who broke into the European market decades ago and triggered demand for and consumption of wood, has taken its first steps in Latin America. The world’s largest furniture seller has entered into an alliance with Chilean group Falabella to arrive with a dozen premises in the region. The first store opened in Santiago de Chile, and they are announcing there will be more Ikea in Peru and Colombia, where further openings are planned through 2023.

The arrival of the world's largest consumer of wood raises a question about the possible consequences for wood in the region. How will Ikea's arrival impact the Amazon forests? Global trade data analyzed by OjoPúblico reveal an increase in timber imports from Brazil by Falabella in Chile and Peru in the last two years.

Since 2018, Brazil became one of the countries that contributed the most wood to this Chilean retail chain managing Ikea stores in Latin America. This growing trend in the import of Brazilian wood and Ikea's refusal to reveal the origin of the raw material it will use in Latin American stores raise the concern of experts in the timber trade.

“With his legacy of unresolved scandals in Europe, Ikea’s entry into huge new markets in Latin America is worrying. The continent is home to some of the most climate-critical forests that remain, and as the biggest consumer of wood on the planet, Ikea’s refusal to answer questions about the origin of the wood to be used in these new stores should raise the alarm.” declared Tara Ganesh, Earthsight researcher, to OjoPúblico.

This environmental organization revealed last year that Ikea supplied the European market with furniture made from timber from illegal logging in Russia.

As part of this investigation, OjoPúblico asked the Swedish company and its franchise Sudamericana (Falabella) about the origin of the wood they will use in their Latin American shops, but both refused to give accurate information on the subject. nor did they deny that their suppliers to supply Ikea stores in Latin America are Brazilian. 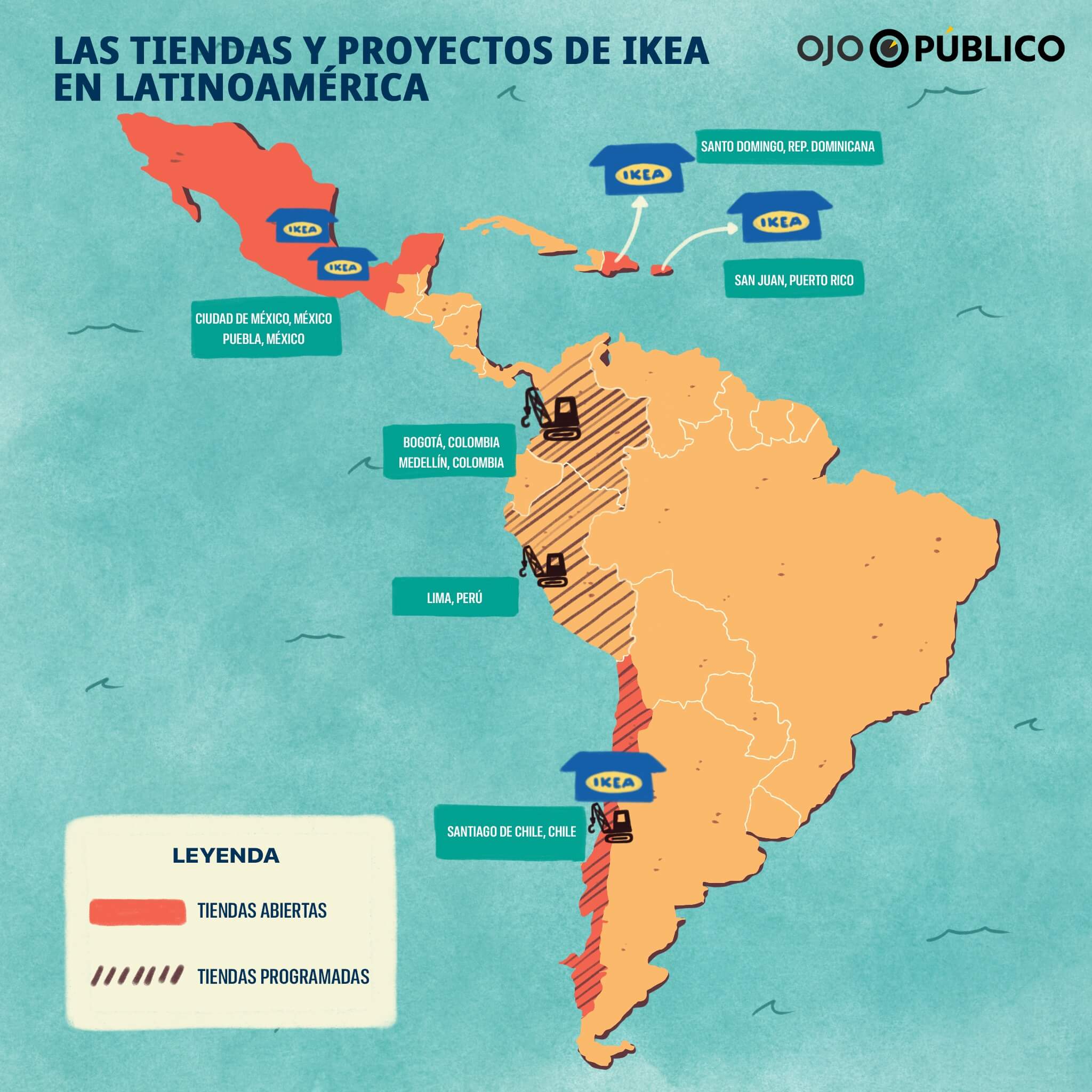 “Ikea’s suppliers source raw materials and manufacture products in many countries and regions of the world. We do not specify the source of material for particular products, as this may vary depending on time and availability.  However, we require all suppliers to supply wood to meet our requirements for more sustainable sources: Wood certified by the Forest Stewardship Council (FSC) or recycled,” replied Ikea’s London headquarters replied to OjoPúblico.

In the absence of official information, experts such as Tara Ganesh warn: “Recent research has revealed that Ikea has used leather and wood from highly controversial sources in recent years. With the systemic problems underlying these scandals unresolved, Ikea’s entry into new markets housing some of the most climate-critical forest resources on Earth should raise alarms for local consumers.”

Demand for Wood is Growing

Falabella timber imports increased in Chile and Peru in the years following the signing of the agreement with Ikea: Unprocessed wood as well as processed wood cuts, both key to furniture making, increased between 2018 and 2021, according to export and import data analyzed by OjoPúblico for this investigation.

In 2021, the year before the opening of Ikea’s first store, the Falabella group imported raw wood like never before in recent years in Chile: it was almost 80,000 tons, more than twofold what it had received in 2020, when it had not even reached 40,000 tons. Imports also far exceeded pre-pandemic figures.

Imports of processed wood from Falabella Chile also doubled in 2021: Shipments spurted to more than 25,000 tons. The trend was repeated in Falabella Peru, where the new store is scheduled to open in the coming months. Revenue from processed wood grew 50% in 2021.

The 32,000 tons imported by this retail group represent more than half of all processed wood entering Peruvian ports.

What is the origin of the wood Falabella imported? Brazil is one of the main suppliers: Their exports to Chile and Peru had a remarkable growth in the last year, according to official data reviewed by OjoPúblico. Brazilian raw timber increased from 2,000 tons to 15,000 tons for the holding's Chilean headquarters.

Most of the unprocessed wood imported from Brazil is board, such as the Oriented Strand Board, a compound of conglomerate chips. Thirty-two percent of these exports consist of these boards, usually made of pressure-glued pine wood chips, which are often used for furniture construction or even, because of their picturesque appearance, also for decoration.

Both pine and eucalyptus are woods Ikea usually uses for furniture. Their plantations can be found in northeast Brazil and in the state of Mato Grosso do Sul, according to experts consulted.

“It is very difficult to be certain that the Brazilian wood used for furniture construction is legal because the system we have is flawed. We have already identified dozens of ways to falsify our system. There are virtually no controls by the authorities. There are signs of fraud in 85% of the forest plans we audited,” Romulo Batista, Amazon manager for Greenpeace Brazil told OjoPúblico .

The specialist also indicated that the Brazilian system itself allows to “make-up” illegally extracted timber to be imported to other countries.

Brazil is the largest supplier of processed wood used by Falabella Peru. This holding increased imports of processed timber from Brazil to Peru last year by 50% to 28,000 tons. What type of wood is processed? The customs code does not indicate the wood species, only that is furniture or parts of furniture.

Imports of processed wood are smaller in Chile, but they grew tenfold just in the year before the opening of Ikea's first store to 3,100 tons. The tariff code indicates that most of these shipments also brought “wooden furniture”. In addition to pine and eucalyptus, the Swedish company indicated that they also use birch, beech, oak, acacia, and poplar.

Miguel Angel Soto, a wood specialist at Greenpeace in Spain, studied the composition of Ikea's furniture. “The company often uses temperate woods, only hardwoods. I have never seen them work with tropical woods. The wood sold in European shops originates from the boreal forests in northern Europe,” he explained to OjoPúblico.

“Ikea is beginning to use eucalyptus wood, coming from plantations in Brazil. Southern Chile and Argentina also have many coniferous wood plantations such as those used for furniture. Anyway, I don’t see Ikea getting into the Amazon, in the tropical timber garden, because they could face a major reputation problem,” Soto indicated.

The kind of deal with Falabella

IKEA, a world leader in furniture sales, signed an agreement in 2018 with the Falabella Group – one of the largest retail companies in Latin America – to arrive in one of the last regions where they had no presence.

The company officially announced that they will spend more than USD600 million to open a dozen Ikea stores in the coming years, operated by this Chilean holding , in Santiago de Chile, Lima, and Bogota. They will join other Ikea stores already open in Mexico and the Dominican Republic, which are managed by the Swedish giant outside of this recent agreement with the Chilean group. 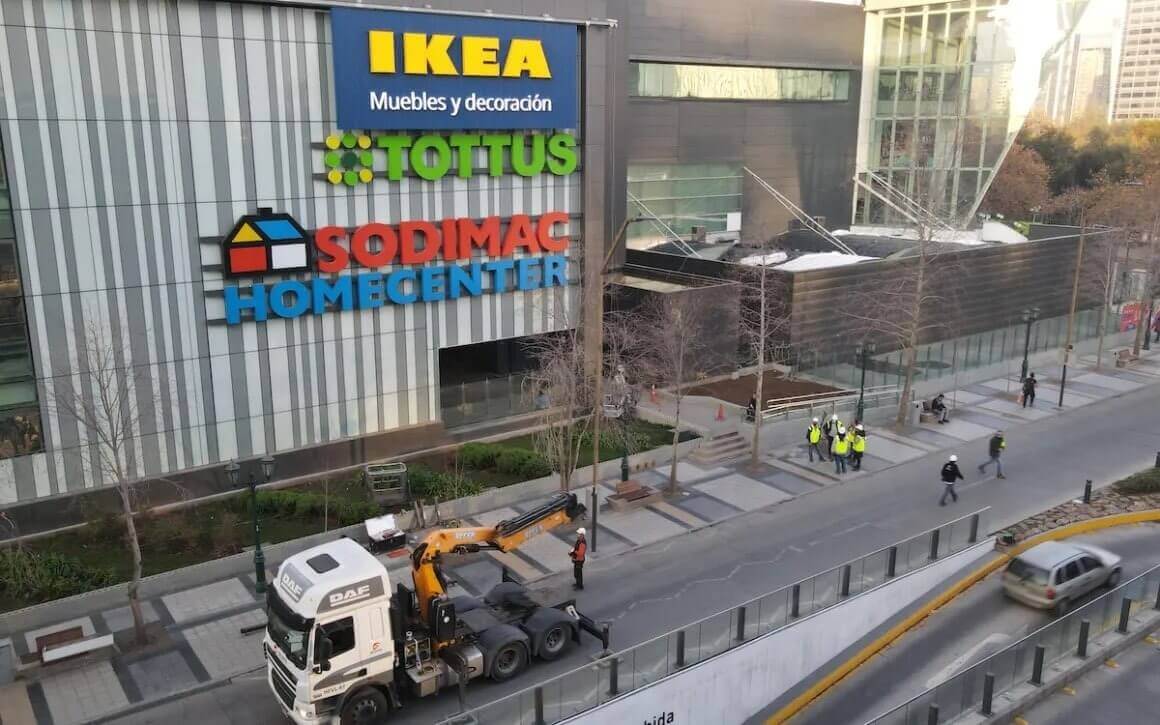 TARGET CHILE. The first store of this commercial deal was opened at Open Kennedy Mall in Santiago.

The expectation was so high that even Mario Marcel, Minister of Finance in Gabriel Boric’s government, took part in the opening of the first store, last August. The Ikea revolution continued for several more weeks when it took 40 minutes just to enter the store. The opening of a second store in the Chilean capital is planned for this year at Mallplaza Oeste.

How does the Swedish giant's franchise system work?

“One company pays another a franchise fee for the right to use its intellectual property. Ikea's franchise offering includes our brands and concepts. Ikea franchisees pay the Inter Ikea Group an annual royalty fee of 3% on their net sales. In return, they are authorized to market and sell our products, to manage Ikea stores and other sales channels,” they explained from their central press offices.

IKEA earned almost USD 1,500 million in net income during 2021, as reported in its financial report, although these earnings include nearly USD 4,500 million in gross profits from their shareholders. Royalties from franchises grew compared to the previous year, but still represent only 5% of the company’s total revenues. 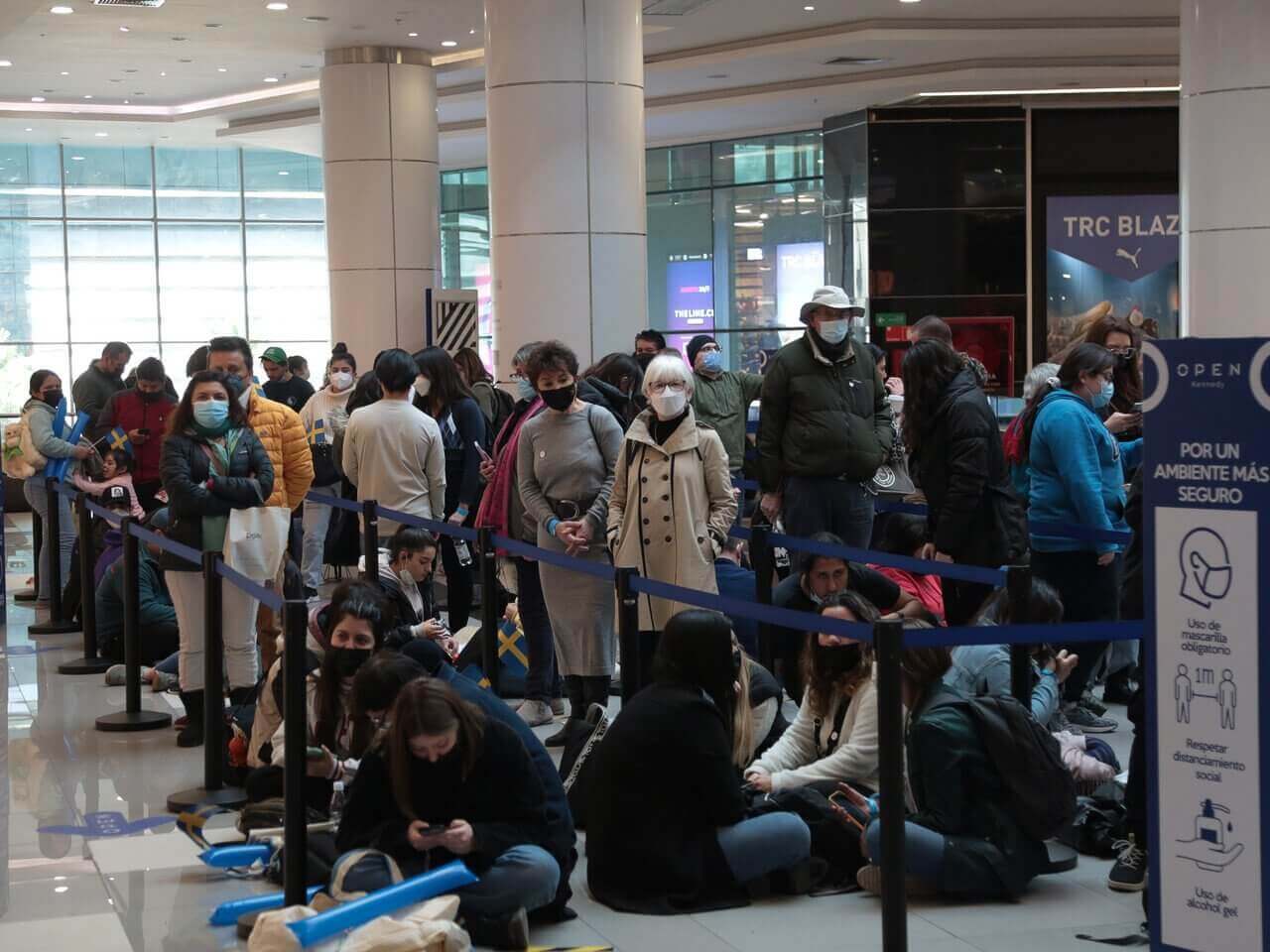 LONG WAITS. Even weeks after the Ikea's store opening, getting in could take up to 40 minutes.

Tax payments are another issue that kept Ikea under the spotlight following the Luxembourg Leaks and Panama Papers revelations. Leaks led by the International Consortium of Investigative Journalists (ICIJ) revealed that the company, which became a Swedish emblem, had built a complex scheme in low-tax European jurisdictions such as Luxembourg, Liechtenstein and the Netherlands, among others, to pay as little tax as possible.

IKEA had revenues for nearly 25,000 million in 2021, but its tax contribution was only 2,000 million, according to the group’s annual report. Three percent of the franchise fees provided by Latin American stores will be included among those multi-million dollar funds that are channeled through complex legal structures often used to elude tax, a legal but questionable practice.

“We pay taxes in the countries where we operate based on the value created there and the economic reality of our business. And we expect the same from our franchisees. Our revenue from the annual franchise fee is taxed in the Netherlands through Inter IKEA Systems BV, while the revenue from Ikea Chile is taxed in Chile through Falabella,” the company explained.

Falabella, in turn, already has a history of presence in tax havens. The Solari family, the holding’s majority shareholder, managed their businesses and private fortunes through a web of offshore companies in Panama and the British Virgin Islands, as  reported by Ciper and La Bot media in the leak known as the ICIJ Pandora Papers.

Latin America was one of the last regions of the world where Ikea had not yet been able to enter. The combination between the low per capita income in the region and the large volume of sales needed by the furniture giant to operate relegated the continent for years.

Only one Ikea store, a test tube of sorts, had opened in 2010 in Santo Domingo, Dominican Republic. It was the company's only store for ten years in the region.

IKEA opened its second Latin American store in Mexico City in 2020, in the midst of the pandemic, and another in San Juan, Puerto Rico in 2021. These three stores are managed directly by the Swedish holding company. But two years earlier, the company had already signed an agreement to extend its brand in South America through a franchise with Falabella that involved opening nine stores in a decade, including locations in Chile, Colombia, and Peru.

Falabella General Manager, Gaston Bottazzini, expressed in a press interview  that the next store will open in Bogota during the first half of 2023. Outside of the franchise agreement, Ikea also plans to open a store in Puebla, Mexico, next year, where its online sales channel is already operating.