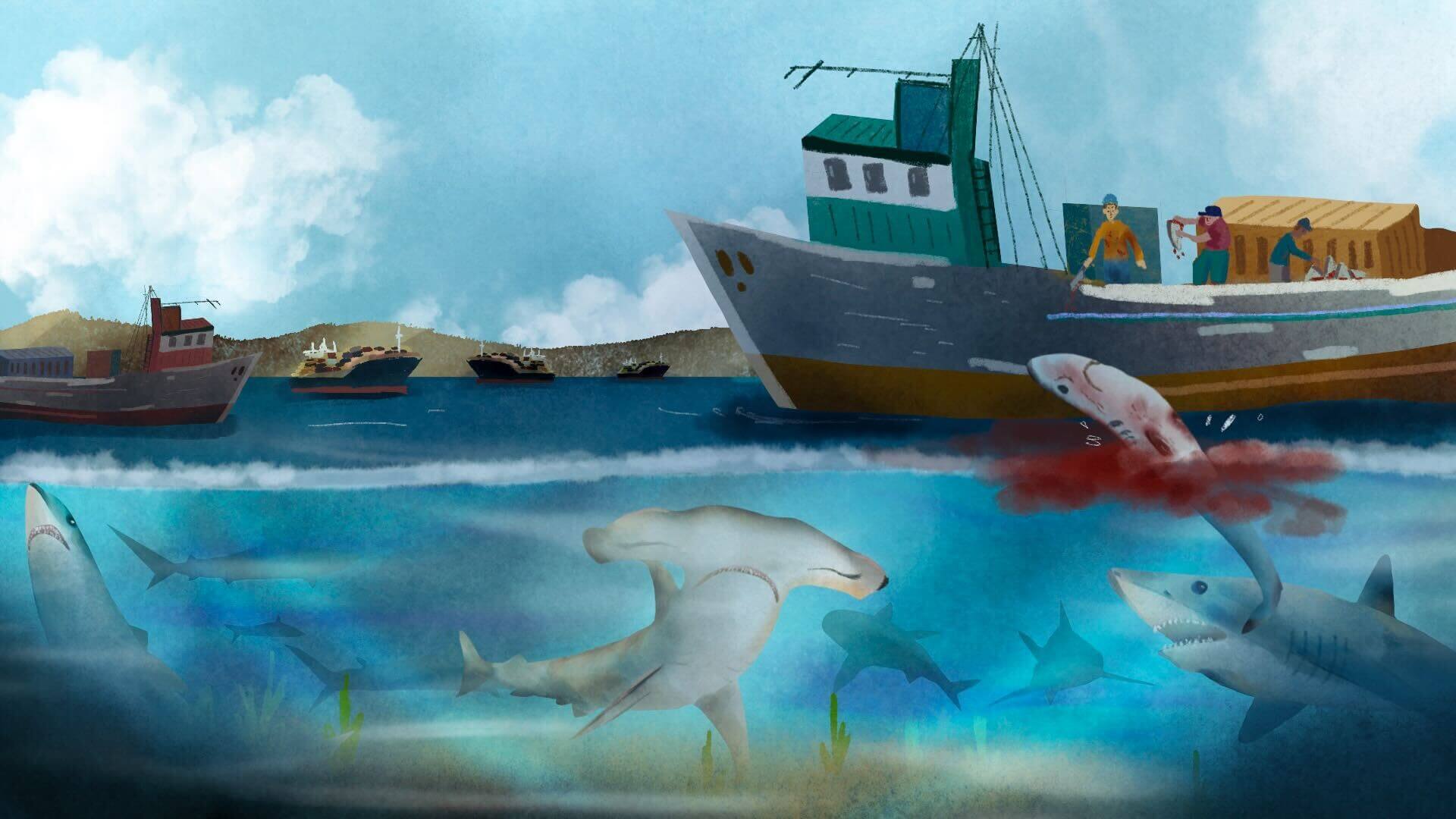 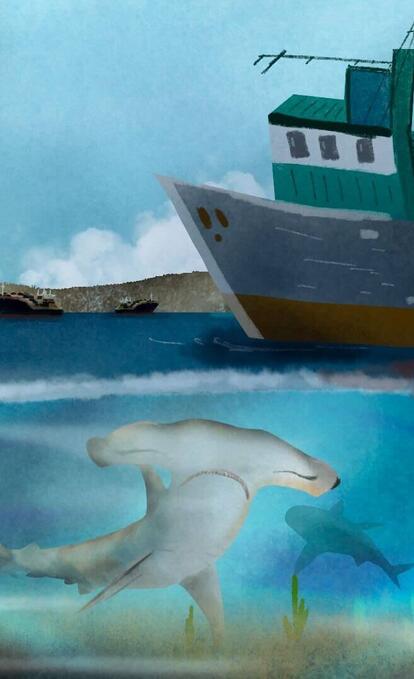 DEMAND. Shark fins are highly valued in the Asian market.

During the pandemic, the export of shark fins to China, Hong Kong and Singapore increased and reached historical figures in 10 years. An analysis of export data by OjoPúblico reveals that, although exports fell months after the 2018 interventions, they increased rapidly reaching a historical peak in 2021. Exports from Ecuador to Peru between 2020 and 2021 represent 62% of all Peruvian exports in the same period. Three of the companies that made the most shipments have a background of Customs interventions when trying to transport fins from Ecuador. At the beginning of February, two businessmen were convicted of illegal fin trafficking.

An unprecedented event in the fight against shark fin trafficking happened in Peru in early February. After four years of investigation, the Superior Court of Justice of Santa, in Ancash, sentenced Jorge Roldan Angulo Sanchez, Ajansa Peru SAC’s general manager (with fiscal address in Los Olivos district of Lima), and Poly Diks Pinto Gonzales, to four and a half years of imprisonment for the crime of illegal trade in shark fins.

On March 13, 2018, in Chimbote, the authorities intervened a trailer coming from the border with Ecuador (Aguas Verdes in Tumbes) heading toward Lima, carrying 2,163 kilos of shark fins of illegal origin. The perpetrators intended to export the cargo to Hong Kong, the main destination for shark fins extracted from Peru and Ecuador. Many of these fins belonged to at least six threatened shark species with restrictions for international trade.

The fiscal investigation of this case shows one of the most frequent forms of shark fin trafficking from this part of the continent: shark fins of suspicious origin entering into Peru from Ecuador, being transported to the port of Callao, and then exported to the Asian market.

The conviction against Angulo Sanchez and Pinto Gonzales – which requires the payment of a S/106,375 repair – is the first of its kind against businessmen involved in the illegal trade in these species, and occurs in a key context: 2020 and 2021 have set an all-time record in the export of shark fins from Peru and Ecuador. From 2018 to 2021, total shipments from Peru doubled (increased by 114 %), and from Ecuador quadrupled (216 %). These are the largest exported volumes in the last 10 years.

Customs interventions have shown that the Tumbes border with Ecuador is still used as a route of passage for shark fin laundering. In Ecuador, only by-catch of sharks is permitted, and currently there are severe restrictions on the marketing of 9 of these species, which makes it difficult to export this product on a massive scale.

An investigation by OjoPúblico proved in 2019 the existence of an alleged network of suppliers from Ecuador, companies importing them in Tumbes, and companies in Lima and Callao in charge of exporting the cargo to Hong Kong.

According to information provided by Customs to OjoPúblico, 71 interventions have been made since 2012, – including seizures, immobilizations, and findings – to over 110 tons of cargo of different shark species (fins and trunks). The modality: companies transfer shark fins of illegal or suspicious origin from Ecuador to Peru and enter them into Peruvian territory for exporting them from this point.

An analysis of Peru's and Ecuador's export data by OjoPúblico reveals that, although exports fell months after the 2018 major interventions, they increased rapidly reaching a peak in 2021.

Peruvian Companies exporting the most

In the case of Peru, among those who have increased their shipments the most are several of the most important exporters, and who have been intervened by Customs at different times. Three of the largest exporters between 2020 and 2021 are Lamarqocha Inversiones, Angaff Peru and Exportaciones JME.

In addition, over the past 10 years these companies have accounted for 43% of the 2,700 tons of shark fins exported from Peru to Hong Kong, China, and Singapore. Peru is among the 15 countries in the world with the largest shark fin exports to China, according to the Food and Agriculture Organization of the United Nations (FAO).

If the analysis is extended to the top 10 exporting companies, several with a background for having been intervened at some point when moving shark fins under the initial presumption of suspicious origin or have links with people convicted of trafficking in species, we will find that they account for 61% of shark fin exports between 2012 and 2021.

Most of them reduced or halted their activities, but only Lamarqocha Inversiones, Angaff Peru and Exportaciones JME increased their exports during the years of the pandemic.

Angaff Peru – intervened by Customs in 2018, and whose owner, Brian Pinto Panduro, is– also increased their exports. Between 2019 and 2021, it quadrupled its shark fin exports: From the initial 21 tons valued at USD 1 million, they exported 91 tons (USD 4.5 million) in 2021. This company also benefited from one of the Reactiva Peru loans for S/580 thousand.

Another company that increased its shipments to China was Exportaciones JME. This is the company whose exports grew the most. It went from exporting 8.9 tons (USD 426 million) in 2019 to 113 tons (USD 4.3 million) by 2021.

The other seven companies intervened by Customs between 2018 and 2019 reduced or maintained their number of shipments. They are Inversiones Sancco, Valrep Internacional, Huiman, Inversiones Peru Flippers, Marea Blue, Mejia C. Export and Inversiones UPC. This group accounts for 18% of shark fin shipments.

THREAT. The shark is key in the ecosystem; the decline in its population in recent years jeopardizes the balance of marine life.

OjoPúblico also analyzed shark fin exports from Ecuador, another South American country with significant sales of these resources to the Asian market. Between 2013 and 2021, the country exported a total of 1,113 tons with an FOB value of USD 25.6 million. Of this amount, 16% were destined for Hong Kong, and 78% were destined for Peru, from where it is later re-exported to Asia.

Alicia Kuroiwa, a research biologist from Oceana and specialist in shark fin trafficking confirms to OjoPúblico that “the origin of fins [exported from Callao] is not Peruvian but Ecuadorian, possibly more than half”. And she points out that persistent hunting is harming the shark population. “The main species coming from Ecuador are listed in CITES (Convention on International Trade in Endangered Species of Wild Fauna and Flora), are protected, and their commercialization is restricted”.

The head of SUNAT's National Customs Control, Jyns Ordonez Torres, told OjoPúblico that they knew that these products come from Ecuador and that it is “a modus operandi. Our task is to identify the crime. We are attentive to the flow that comes from the northern border to Lima”.

According to the public worker, there are two strategies used by export operators to mobilize illicit cargos of shark fins. One of them is not declaring the goods, that is, when the authorities review the documents, they do not match the physical cargo, or they even hide the products to avoid detection. The other modality is combining the merchandise, mixing in the shipment the shark fins of protected species with permitted ones.

More than100 million sharks are hunted each year in the world. A figure that threatens one of the greatest predators of marine fauna with an important role in the balance of its ecosystem. Indiscriminate exploitation has led to a 71%reduction in the overall shark and stingray population over the past 50 years.

The large increase in demand, mainly in the Asian market, for the production of an expensive shark soup, is one of the factors that has deepened the pressure on these species: One third of all types of sharks and stingrays are at risk of extinction, according to the International Union for the Conservation of Nature (IUCN). 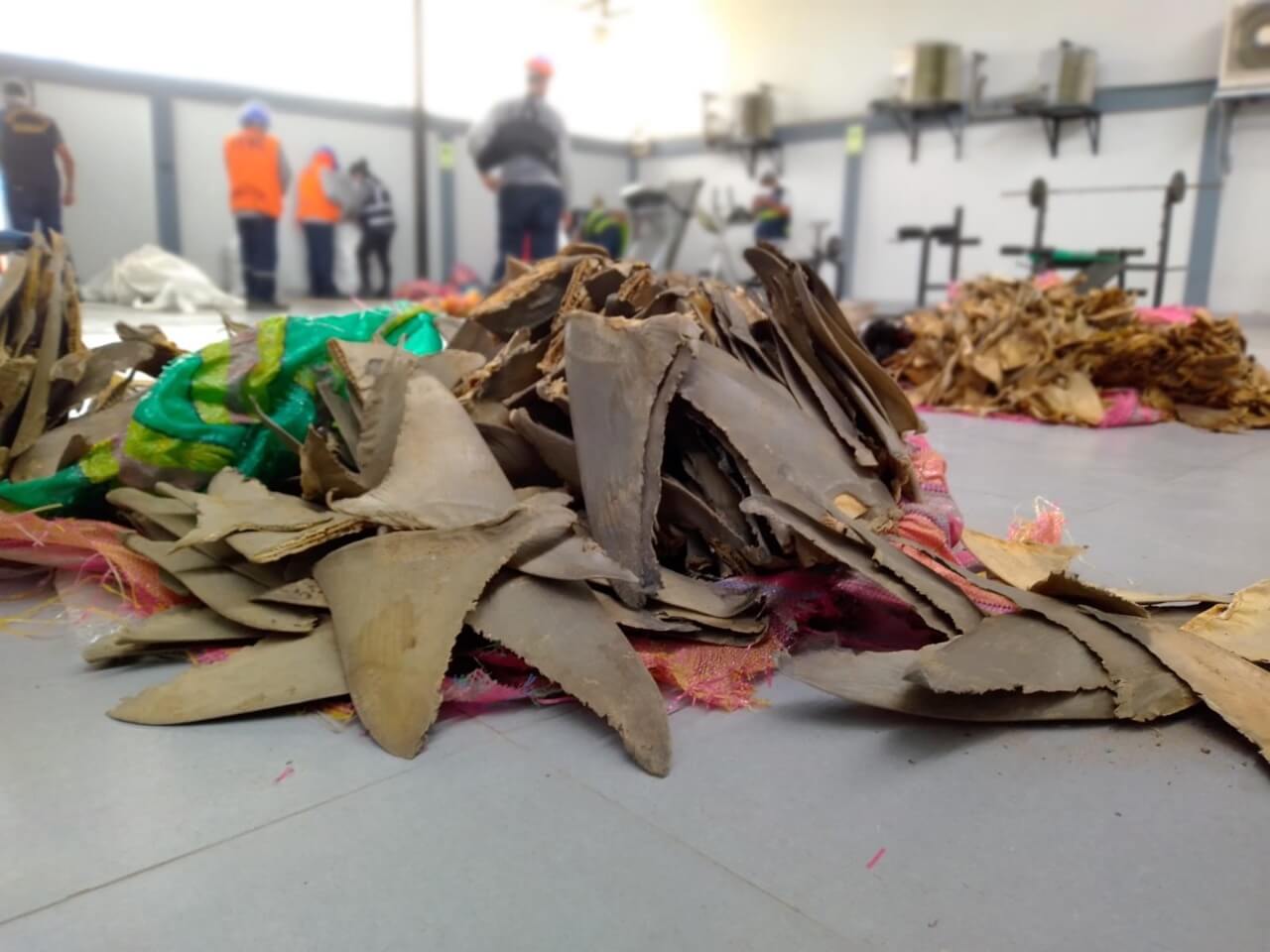 Of the 66 species reported in Peru, 32 are among the most caught and eight are vulnerable due to overfishing. At present, only two types of sharks are found to have some protective measure. Since 2017, all activities affecting the whale shark (Rhincodon typus) has been prohibited, and since 2016 there is a temporary ban for hunting the hammerhead shark (Sphyrna zygaena).

The species protected by CITES and which Peru is also required to monitor under this agreement are the alopias shark (Alopias pelagicus, Alopias superciliosus and Alopias vulpinus), shortfin mako shark (Isurus oxyrinchus), the smooth hammerhead (Sphyrna zygaena), and silky shark (Carcharhinus falciformis).

However, customs records do not allow an accurate measurement of which species are being exported. A study by Oceana confirms that “SUNAT's official information on exports is not very detailed on species, because one shipment can transport more than one.”

This problem was also identified by OjoPúblico during this investigation. However, a preliminary analysis of existing (although limited) customs information reveals that several CITES-protected species are being traded; it is the case of alopias and smooth hammerhead sharks.

The head of SUNAT's National Customs Control, Jyns Ordonez Torres told OjoPúblico that it is possible to improve the traceability of shark fin shipments. One way is to have “milestones in key parts of the process so as to know the origin of the product”, that is, to include unloading stations, routes, ports, and such. This initiative is already being implemented for loads of wood of illegal origin.

One absence complicating this problem is that in Peru there is no list of endangered species for marine fauna, since they are not listed as wild fauna, but as “hydrobiological resources” and that it is up to the Ministry of Production (PRODUCE) to take control measures. “PRODUCE should, and is obliged to, make a list of threatened aquatic species (fresh and marine), and is even one of OECD recommendations,” said Alicia Kuroiwa.