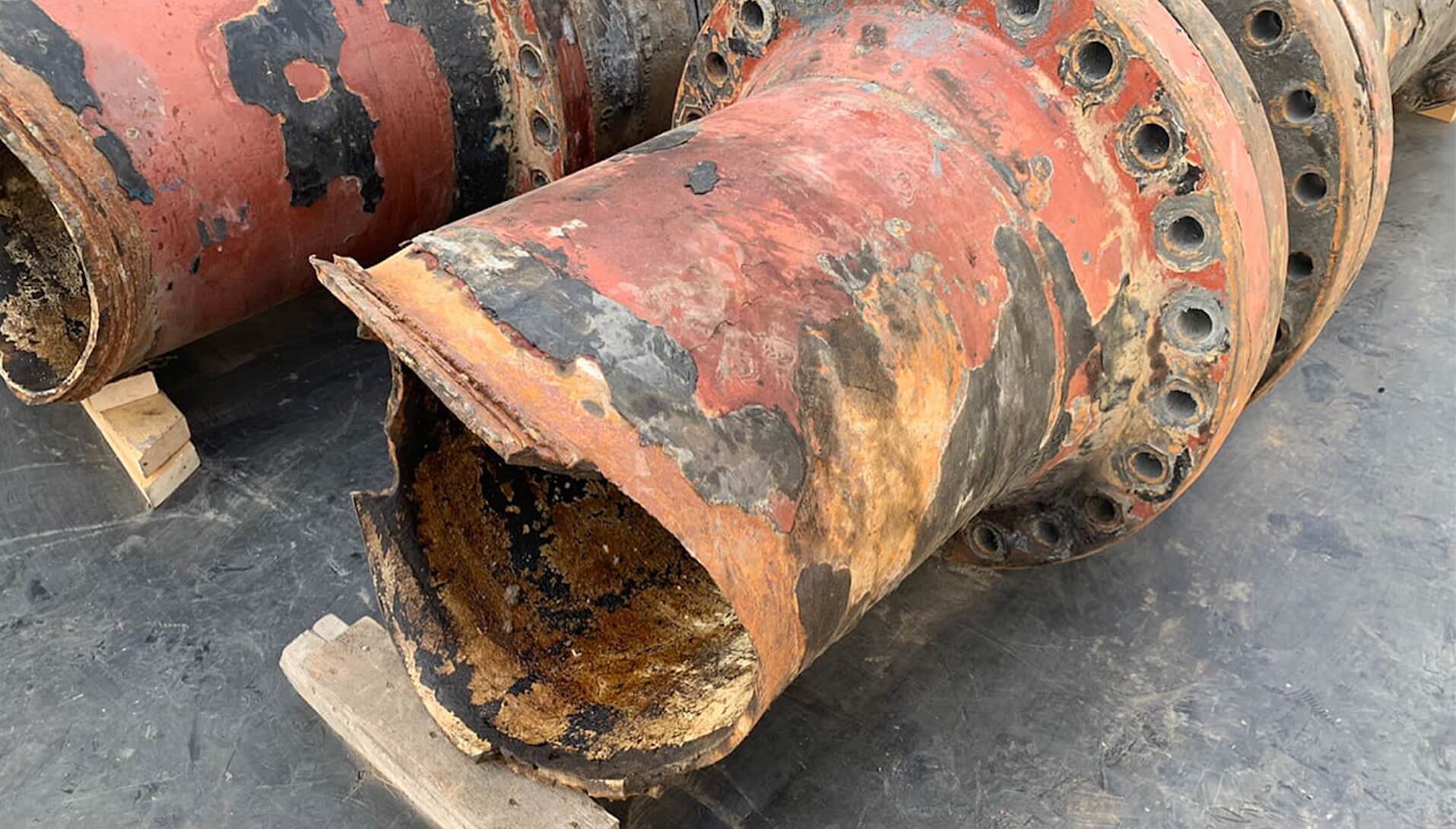 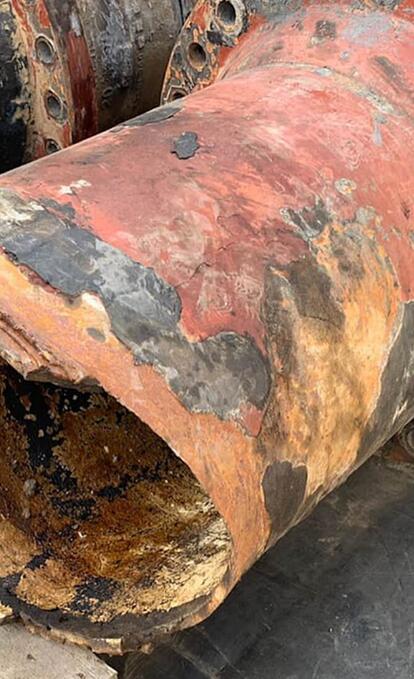 DIAGNOSIS. Three national and international specialists analyzed the photos and pointed out that there was "lack of maintenance".

OjoPúblico obtained pictures that show corrosion on the steel tubes that tore from the underwater piping system at Repsol’s oil refinery, La Pampilla. The images are part of the official investigation into the January 15 spill at the refinery and undermine the company’s claim that it wasn’t its fault. Three specialists say they see inadequate maintenance.

Since Repsol’s oil spill off the coast of Peru a month ago, the company has insisted it wasn’t its fault. In its first public statement about the accident, it attributed it to “the violence of the waves” from the volcanic explosion in Tonga. A spokeswoman described a wave so powerful that an oil tanker crashed against a terminal’s infrastructure while unloading, and the president of Repsol Peru, Jaime Fernandez-Cuesta, said "something extraordinary was happening in the water."

It’s true that abnormal waves from Tonga reached Peru’s coast. But there’s more to the spill than that. OjoPúblico obtained photographs that show corrosion on two connection pipes that were torn off the refinery’s underwater piping system that day, while the Italian ship Mare Doricum was pumping oil into the refinery. The images are part of the official investigation into spill and show a level of corrosion that three experts said indicated a lack of maintenance.

“They were rusted, and you can see not much force was needed for them to break, and they tore apart,” said Jorge Filinich, a Peruvian naval expert trained at the World Maritime University in Sweden with two decades of experience as a consultant on maritime accidents.

The broken pipes connected hoses from the oil tanker to the terminal’s underwater piping system, known as the PLEM (Pipeline End Manifold), and were removed from the water after the spill, according to sources.

The experts consulted by OjoPúblico said only a physical analysis could determine the degree of corrosion, and that other factors would have to be considered to determine a definitive cause of the spill. But all three agreed the corrosion likely played a role in the breakage.

“It looks like it thinned from the outside, in my opinion and with what I know from what I can see, and it shouldn’t have failed,” Bill Mott, a senior corrosion engineer and consultant based in Alaska. Indicating the area where the rupture occurred, he said, “it looks to be pretty heavily corroded…it had obviously broken down.”

The patches seen on the outside of the pipes show that the coating layers that are supposed to protect them from corrosion had retreated, said Juan Caballero, a corrosion expert and one of the directors of the Association for Materials Protection and Performance (AMPP). 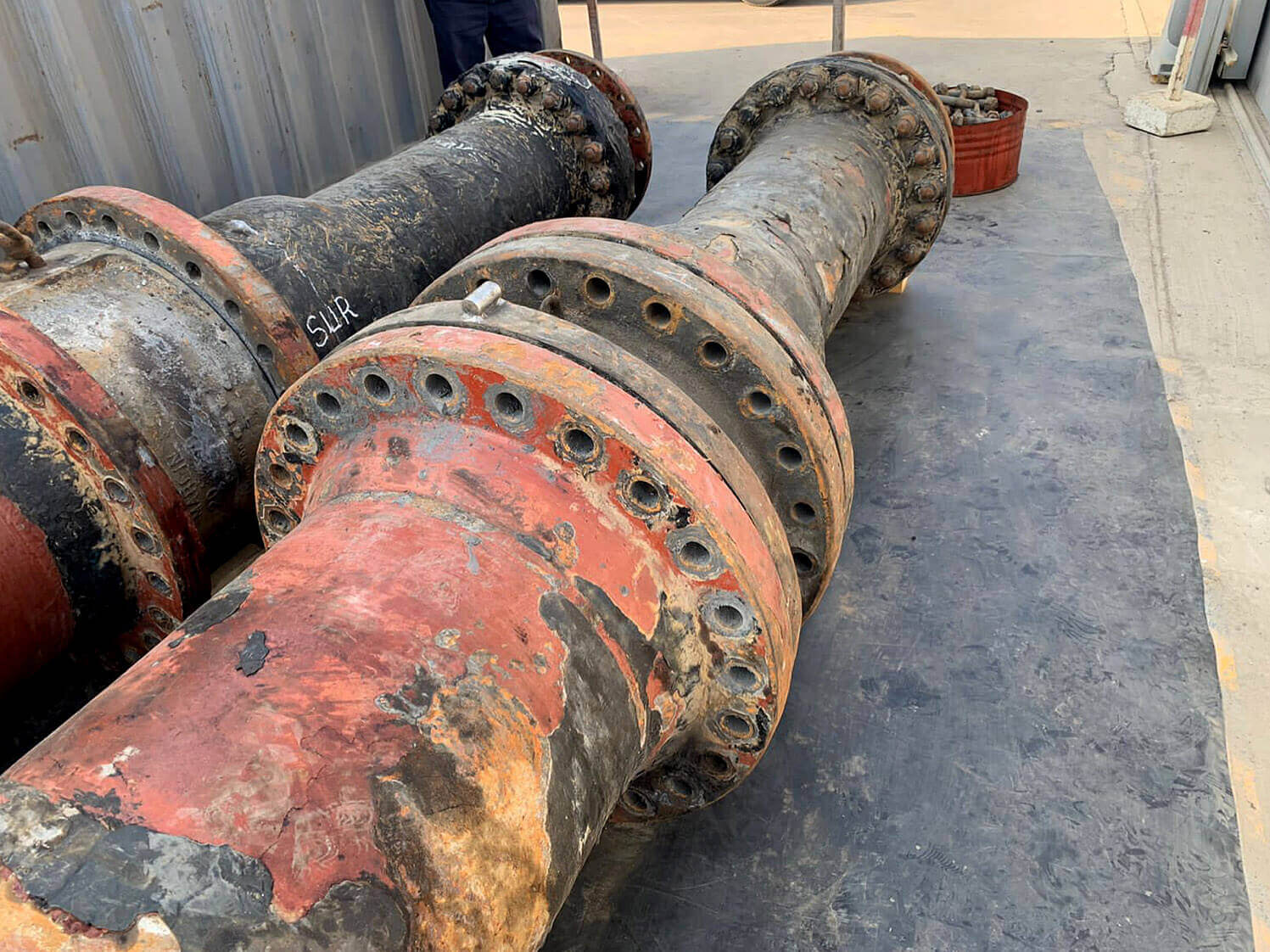 “When your coating system…is missing, you immediately start to have a corrosion process,” Caballero explained. “You will begin to lose material thickness, and that will compromise the structure integrity. Eventually it can lead to cracks.”

Caballero said a simple visual inspection by divers should have alerted the company to the risk. “That’s a common practice with underwater structures that you can’t see every day,” he said. “You send divers periodically to look at how the coating system is working…as soon as you see this type of failure you need to react.”

In response to questions about the photos, Repsol did not deny their authenticity, but it did deny a lack of maintenance. "The PLEM was in optimal condition and this has been confirmed by the authorities," the company told OjoPúblico in a statement. "We insist that only an extraordinary force has been capable of causing its rupture."

The photos reveal new evidence about the spill amid limited information from authorities and suggest the company’s responsibility for the disaster may go well beyond its failure to contain it and clean it up quickly.

Repsol only publicly acknowledged that the pipes had broken completely off the PLEM after environmental crimes prosecutor Ariel Tapia, in charge of the probe into the spill, revealed it in an interview with state media. “First we were told that it was a fissure. Now we’ve been informed it has broken,” he said.

The complete detachment of the pipes from the PLEM helps explain why so much oil spilled: more than ten thousand barrels, according to the latest estimates by the company and authorities.

The broken pipes were used to connect two hoses from moored oil tankers to the PLEM platform 18 meters underwater. The crude pumped through the hoses is then transported uphill to the refinery on land through a 4.5-kilometer pipeline that can hold 16,600 barrels of oil.

During the abnormal wave activity, the mooring ropes tied to one of five buoys that help fix the ship in position snapped, and the two connection pipes—each about 51 centimeters in diameter—detached from the body of the PLEM.
That left two gaping holes in the PLEM, allowing crude to leak from the platform while the tanker pumped oil directly into the sea through its hoses.

César Ipenza, an environmental law specialist, said the photos of the broken parts raise questions about the conditions at Repsol’s other facilities and complicate the company's legal defense. "These images show... a situation of greater responsibility by the company, along with greater responsibility in criminal proceedings, in civil proceedings, in the compensation process," he said.
Administrative fines for the company, he said, can reach up to some $36 million, he said. “But in civil court, everything that fishermen and those who depend on the sea have stopped receiving will be analyzed, in addition to the costs of compensating the impact on the environment,” Ipenza said.

The PLEM at terminal 2 of La Pampilla, where the spill occurred, was made and installed in 2013 under the supervision of state energy regulator Osinergmin, which is also in charge of verifying maintenance work and the inspection of its equipment.
Osinergmin declined to comment on the pictures. It said that once the rest of the PLEM is removed from the ocean, it will be sent to a laboratory for a detailed a technical analysis along with its components. "Since the PLEM has not yet been extracted, nor subjected to scientific laboratory analysis, it is not responsible to draw conclusions," it said in a statement.

Inspections of the PLEM using ultrasound yielded "satisfactory" results in 2019 and 2020, Osinergmin said, and a hydrostatic test of the system – which applies pressure to detect leaks – was carried out before the spill in January and also gave acceptable results.

“Having done all the tests to check the quality and integrity of the structure, if an anomalous event occurs… of such a force that it causes the two (connection tubes) to break on the PLEM, then that’s not something that any supervision can foresee,” the head of Osinergmin, Jaime Mendoza, told lawmakers on Friday at a congressional session.

Some have questioned whether the waves that day were as disruptive as the company claimed. The president of the Peruvian Oceanic Sailing Association (AVOP) has said the sea near the refinery was visibly calm when the spill occurred. And according to the refinery’s 2017 operational manual for its maritime terminal, the wave height limit is 2 meters during loading operations, above the size of waves forecast and registered in the bay of Callao that day.

The captain of the ship, for his part, denied that the vessel had moved forward and collided with the terminal facilities, though he acknowledged an abnormal swell had occurred that snapped the mooring ropes.

In a series of complaints about Repsol’s response to the incident, he also accused the refinery of laying out a containment barrier too short to encircle the oil slick and refusing to inform how much of the oil from the tanker had entered the refinery.

Filinich, the Peruvian naval expert, said he sees no signs of the twisting or bending he would expect if the pipes had been in good shape and tore off due to an extraordinary force. He also said he does not see signs of welding seams that he says should be applied and tested as part of proper maintenance, and which should appear as silver-colored at the breakage.

Caballero with the AMPP, who has a consulting company that performs corrosion inspections and technical failure analysis, said a welded joint is often the weakest point in a piping system if it is not protected and maintained. “It is the part that usually fails first, and it is very common in Latin America that this welding is not done properly,” he added.

Repsol said in a statement that the rupture did not occur in the welded part itself but in the "solid body" of the PLEM itself, without giving further details.

It is not the first time Filinich has seen the underwater pipes of Terminal 2 at the La Pampilla refinery. He conducted the technical investigation for authorities into the cause of a spill there in 2013, when an estimated 196 barrels leaked.

Filinich concluded then that a hole the size of a pinky finger had opened in part of the PLEM due to corrosion and a lack of maintenance, and recommended replacing it with a new one. “The PLEM had been in the water for 30 years, and the company never worried about inspecting or calibrating it,” Filinich says. “The metal sheet had gotten so thin it looked like a piece of paper.” 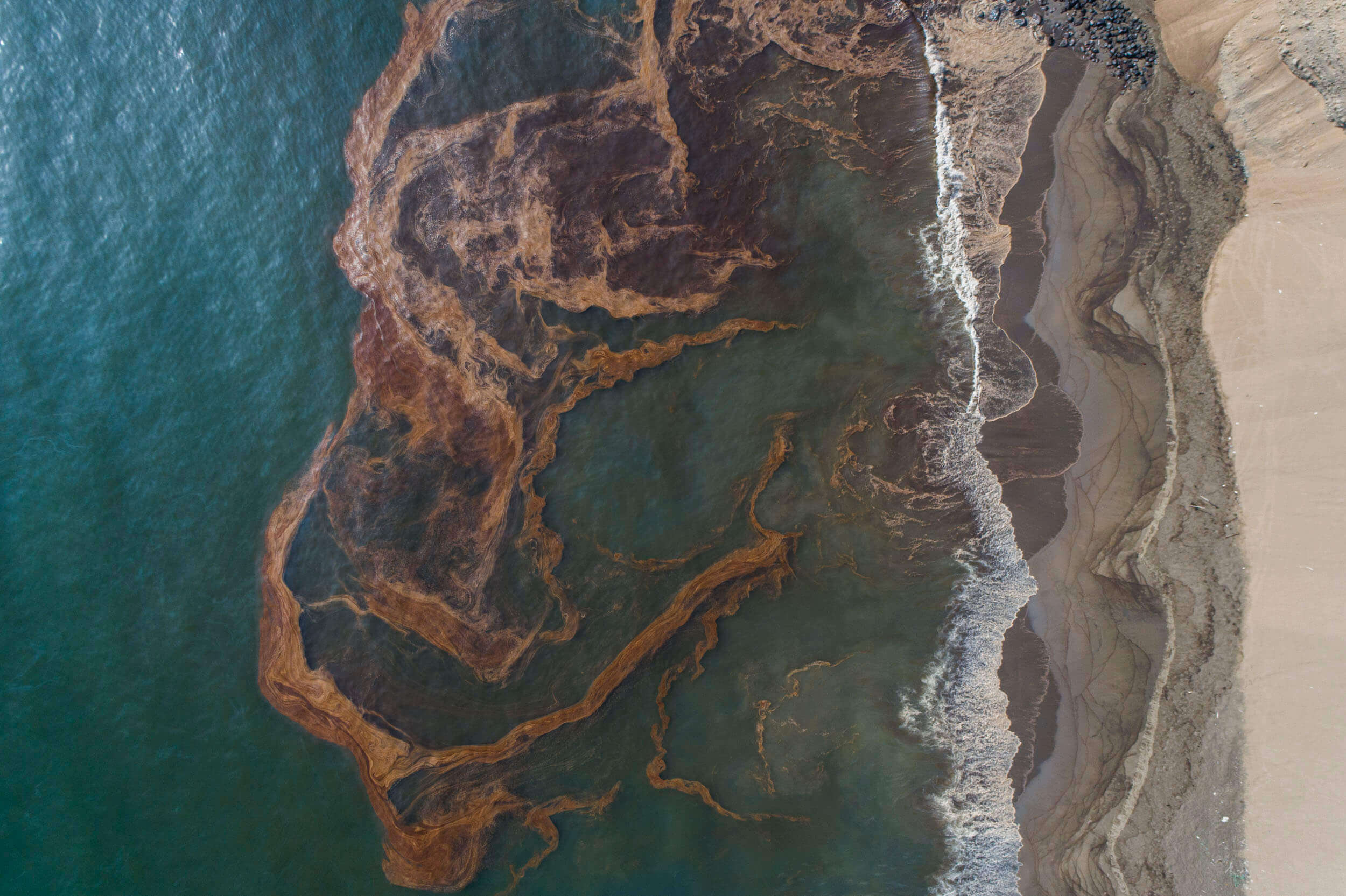 CONTAMINATION. The sea north of Lima still shows large amounts of oil that continues to harm the ecosystem.

Peru’s environmental authority, however, ended up excluding the charge of inadequate maintenance from the fines imposed on the company, which added up costing the company less than $200,000. It wasn’t due to a lack of evidence but because the company successfully argued that the competent authority for such a sanction was an office in the Navy, and that Osinergmin had initiated a process for the same charge.

"There is a concrete responsibility here and a precedent in the not-too-distant past," said Ipenza, calling for a fine big enough to set an example this time.

Mott and Filinich added the pipes wouldn’t have broken at all if the hoses that connect to the tanker had emergency shutdown valves, or a “marine breakaway coupling,” which acts as a safe disconnection point to keep other parts in the system from breaking.

“In the event of a rogue wave… it should pop and shut the valves,” said Mott. “Had they been in place and maintained, that should have been the point of failure and would have limited the spill to a few gallons.”

It’s not clear if there were any kind of safety or emergency valves on the hoses during the discharge, or how long the tanker may have inadvertently been pumping oil into the sea.

Osinergmin said only that "regulations in force do not establish mandatory valves" in the hoses. The refinery’s technical manual says Terminal 2 hoses have butterfly valves, which are used as part of normal, non-emergency operations, and there is no mention of the breakaway couplings that the hoses at another terminal at the refinery has.

Repsol said the refinery “has and had the appropriate valves for the flow of oil at the time of the incident” and that "regarding the hoses, it is up to the ship to provide a response about their condition."

It is also unclear how soon the refinery was able to close the 4.5 kilometer pipeline using what Osinergmin described as a “remote access blocking valve.” Tapia, the prosecutor, said that the oil appeared to continue to leak from the terminal until the following day.
Osinergmin said Repsol recovered 14,400 barrels of crude from the pipeline with a suction machine from the refinery on land and will retrieve the PLEM once the remaining 2,200 barrels of crude are retrieved.

"If we see that the infrastructure and equipment are in poor condition it’ll be necessary to take greater care to avoid a new dumping of oil in the sea," said Ipenza.