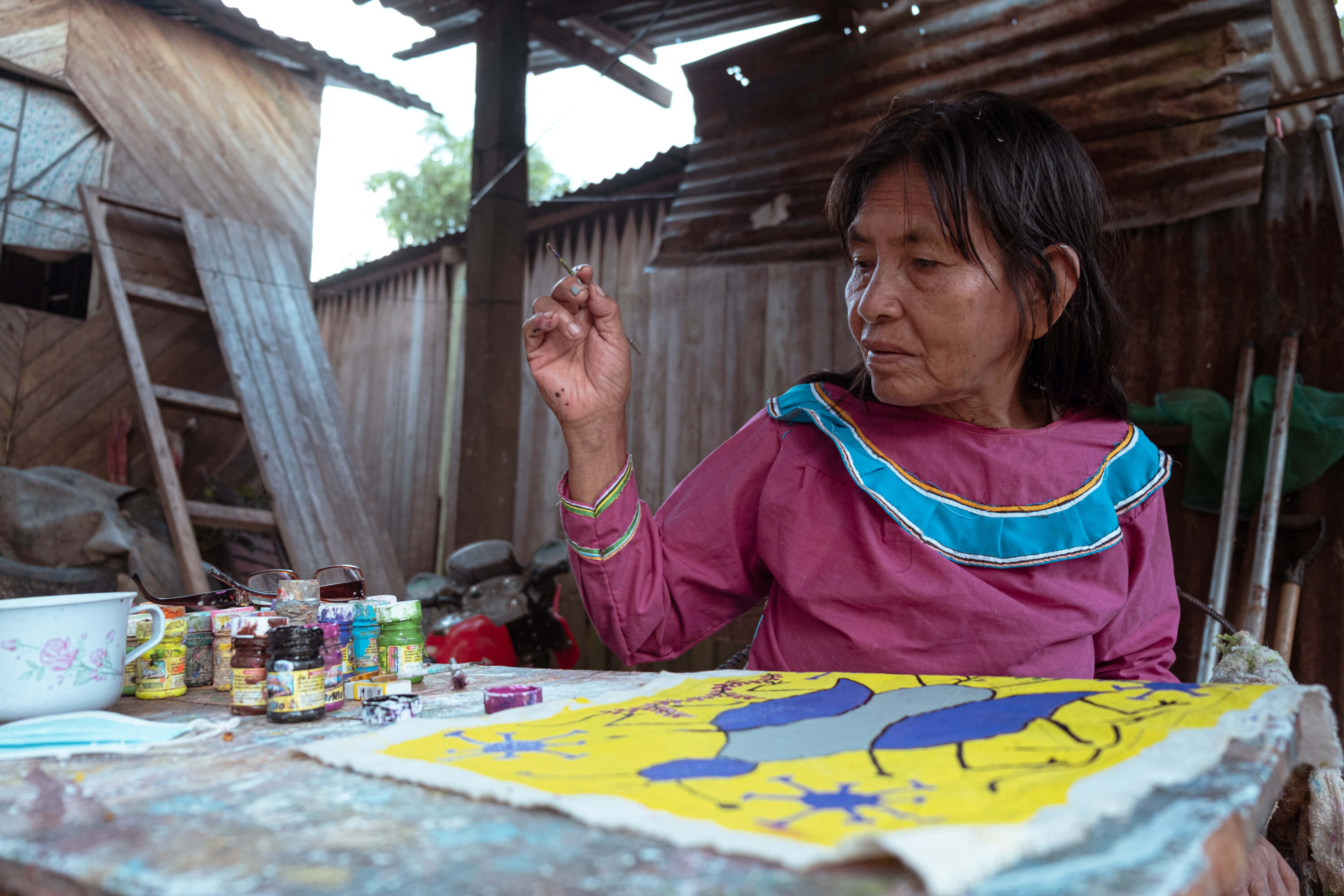 Matico guardian's fight against the coronavirus

The pandemic spread violently in the Peruvian Amazon: thousands of indigenous people were infected and many died in their communities, far from the precarious hospitals that looked saturated with corpses at the height of the health crisis. One of the hardest-hit regions was Ucayali, on the border with Brazil, inhabited by the shipibo-konibo. Official reports have silenced these deaths, but art keeps their memory. After overcoming Covid-19 twice, the indigenous artist Lastenia Canayo García —also known as “Pecon Quena”—, has captured the soul of the coronavirus guardians and the plant in which they found refuge: matico. Her art is the expression of that constant battle between the two guardians in the worldview of the new world brought about by this disease.

She had been sick for three weeks, when she decided to get out of bed to look for water. Lastenia Canayo García took the first step, the next, and just one more. Everything was spinning around her, but she saw a spirit in the form of a fly about to attack her. So she tried to move away and stumbled. Already on the ground, she says, she recognized the fly as an ibo (master or guardian) for the coronavirus. Hours later, still with a fever, she began to place the guardian of the new disease on a tocuyo cloth. “Ibos are neither good nor evil, they are guardians of nature; but they do punish those who misbehave, those who disrespect plants,” she explains.

According to shipibo-konibo tradition, the indigenous people use two names: one in compliance with Peruvian law, which they know as nawan jane (their mestizo or foreign name); and one in their native language, or janekon (true name). Lastenia’s name —an artist born in the Roaboya community of Bajo Ucayali, in Loreto— is Pecon Quena, which means “the one who summons the colors”. 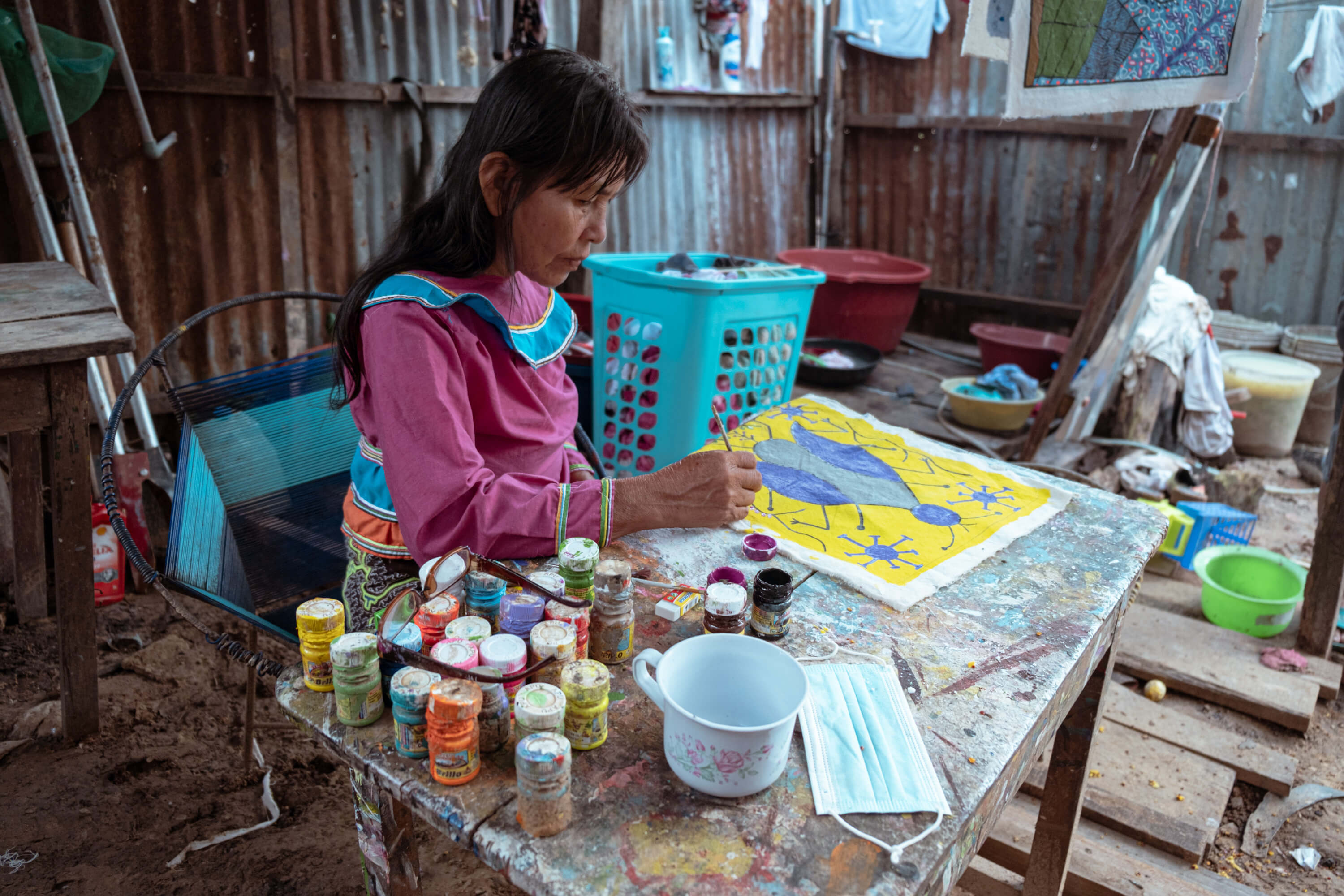 Pecon Quena was trained in the graphic art of Kené, as part of the tradition of the shipibo-konibo people, an ethnic group known for the beauty of its handicrafts and textiles. When she was eight years old, she was already making pottery (chomos, mocahuas, callanas) under the instruction of her grandfather, the curaca (indigenous chief) Arístedes García, and her mother, Maetsa Rahua —which means “she who sees a sound”. At that age, she also learned to paint and embroider. And although she stopped doing it for a while due to family and economic issues, years later an opportunity would bring her back to her origins.

Now 60 years old, the artist lives in a wooden house in the Roberto Ruiz Vargas human settlement, in the district of Yarinacocha (Ucayali), with her eldest son and daughter-in-law. There she produces embroidery, pottery and paintings being shown in important galleries and museums in the country and even abroad. Nevertheless, the pandemic —she explains— has changed everything.

Not only did she face the virus twice —she got sick in April last year and again last March— but also the hard economic blow due to the lack of spaces to sell her pieces. “This situation is a setback for us, I can no longer sell in galleries, only through friends who call me for special orders,” she says.

These difficulties have not kept her away from the small workshop she has at home. There, in the afternoons, she paints “the owners” of the coronavirus and the matico, while she listens to the swaying of the plants and the overwhelming croaking of the frogs. “I draw the ibos that live with us. Every living thing has a master, a guardian who protects it,” she says. “I see them walking, I see them with us. What I do is to capture them so that other people who are not indigenous can see them as we [the Shipibo] do.”

Luisa Elvira Belaúnde, an anthropologist and associate professor at Universidad Mayor de San Marcos, explains that the vast majority of the shipibo-konibo indigenous people are artists, as they are taught to embroider, paint, and work with clay from an early age. Lastenia Canayo, however, is a pioneer of figurative painting of this people's worldview. “I didn't learn by watching others, I learned by myself, with my imagination,” she says. 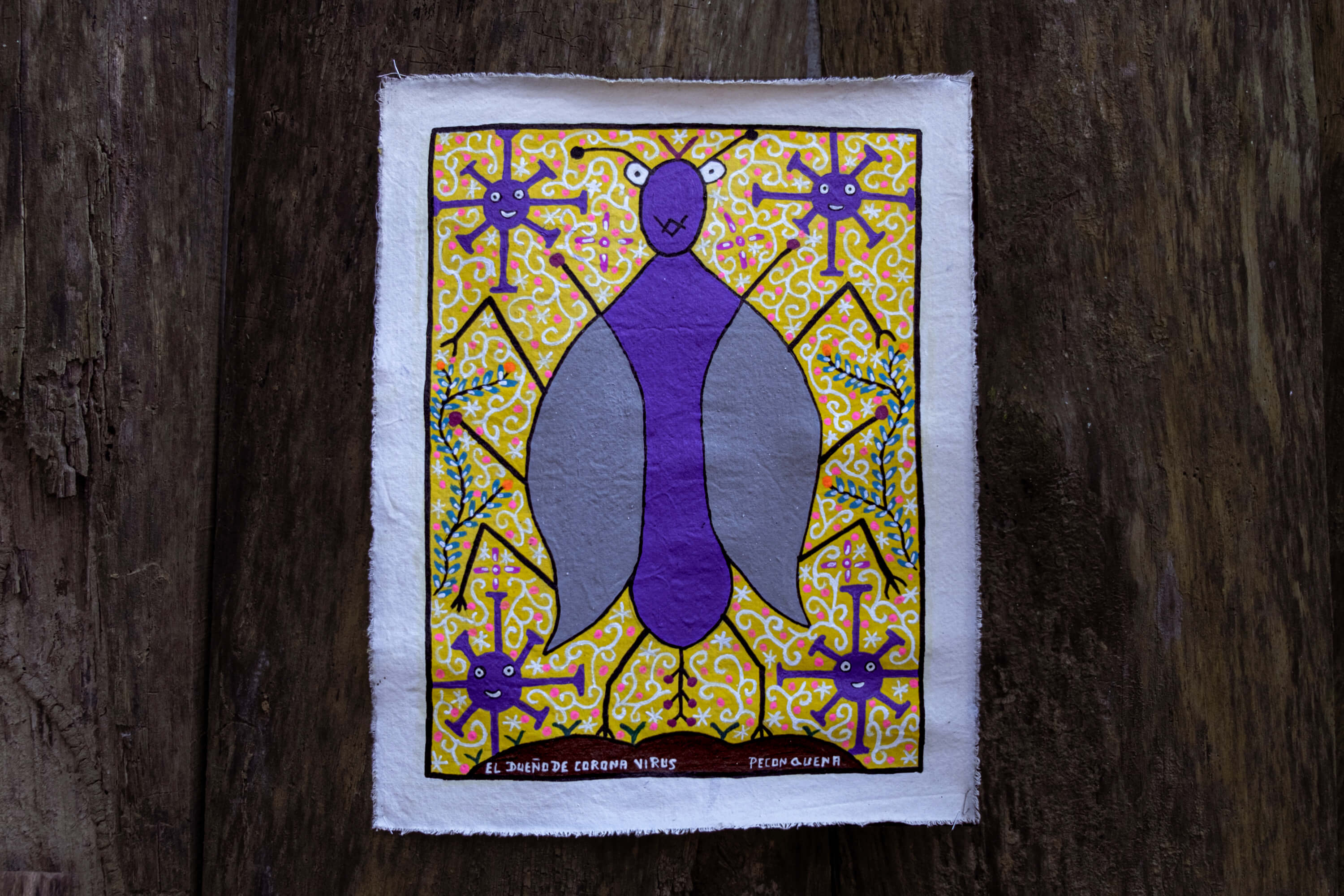 THE FORMS OF THE VIRUS. "I draw the ibos that live with us. Every living thing has a keeper, a guardian who protects it. I see them walking" he says.

Today, the artist is in charge of representing the ibos (owners or guardians of nature) and the yoshin (devils), beings that live with them. Her knowledge, according to historian María Belén Soria Casaverde, comes from the oral tradition of the shipibo-konibo culture. Thus, Lastenia's work expresses the magical spiritual world of the joni (shipibo-konibo men) and, in general, of how the Amazonian man relates to nature, in a contemporary language.

“Their works express a particular way of understanding the world, called ‘ecosophy’ by [Norwegian philosopher and environmentalist] Arne Naess and [Swedish anthropologist] Kaj Arhem. This way of life has allowed the shipibo-konibo to coexist in harmony with the Amazonian ecosystem, which today suffers from the depredation of Western materialism, lacking all respect for nature,” Casaverde maintains.

The ibos portrayed by Pecon Quena are of animal origin, such as “The Wasp Owner”, “The Maquisapa Devil” and “The Hummingbird Female Devil” but also of vegetable origin. These are related to three types of plants: timber trees, like the ”Lupuna Devil”; plants with therapeutic properties possessing rao (sacred in Shipibo), like the “Owner of Sangre de Grado (Croton lechleri )” and edible plants, like the owners of the Watermelon or the Lemon.

“Through her art, she shows us the need to relate amicably with the owners of nature. Lastenia is a messenger, a translator of the Shipibo-Konibo worldview, who shows us things not easily seen, if not in dreams, an ayahuasca session or in the depths of the jungle,” the anthropologist says.

However, her work was not always like this. In 1986, when Pecon Quena resumed her artistic work, she made ceramics with Kené graphics, which she sold to tourists in the port of Yarinacocha. The chance to show her talent came in 1997, when the Peruvian historian Pablo Macera Dall'Orso invited her to work with him at Universidad Nacional Mayor de San Marcos.

“A friend introduced me to the congressman [Macera]. He asked me to draw the things I see in the Amazon, and I portrayed an ibo. I explained to him that he was an owner of nature; he was surprised and I worked with him for seven years [until 2004],” recalls the artist.

Three years after that initial painting, Pecon Quena presented her portraits of the ibos (owners of nature) in a national exhibition of UNICEF's Mothers/Girls project, at the Seminar of Andean Rural History of the Universidad Nacional Mayor de San Marcos, which brought together several indigenous artists.

Years later, the experience encouraged her to publish “The Owners of the Shipibo World”, a book that compiles 104 oral stories of the ibos. And, over time, her pieces began to be part of exhibitions at the Museum of Contemporary Art in Lima and the National Museum of Peruvian Culture and other artistic spaces such as Ministry of Culture’s Ruraq Maki fair 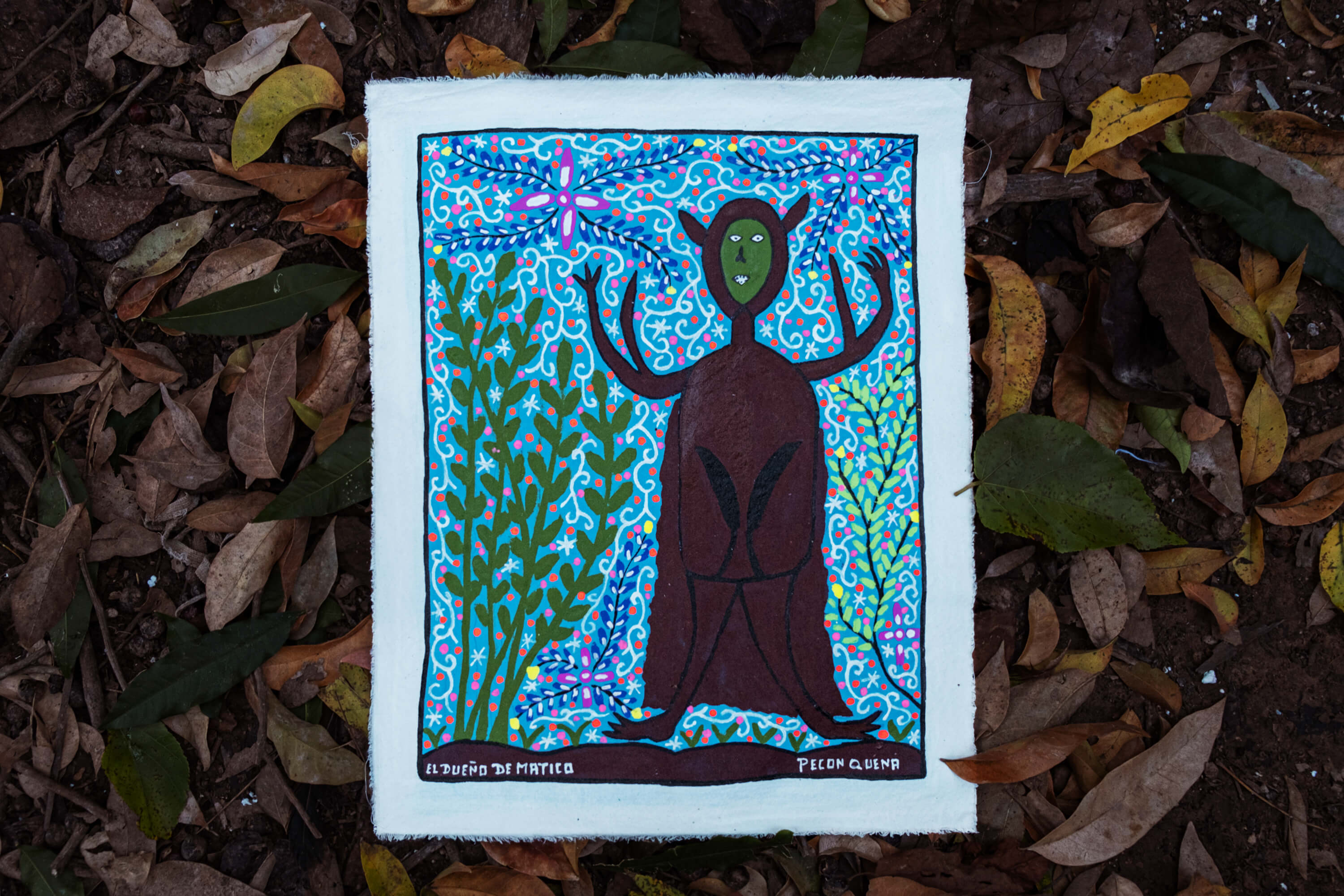 GUARDIAN: The artist Pecon Quena paints the soul of the plant in which hundreds of indigenous people found shelter during the illness: the matico.

Pecon Quena describes matico, a medicinal plant she used to alleviate the symptoms of Covid-19, as the “protector of the indigenous world.” This plant is widely used by the shipibo-konibos in steam baths and infusions. In Ucayali, a team of young volunteers grouped in the Comando Matico (Matico Command) visits indigenous people who are sick with the new coronavirus to offer them help.

This people, made up of around 32,900 indigenous individuals living on the banks of the Ucayali river and its branches in the regions of Loreto, Ucayali, Madre de Dios and Huánuco, is the fourth ethnic group most affected by SARS-CoV-2, according to the Ministry of Health (MINSA). As of July 11, the Room of indigenous population with Covid-19 registered 1,247 infected. However, specialists explain that there is a significant underreporting.

“This report only includes people who attended a health facility or were screened in disease detection campaigns. There is a big gap in the registration of cases, because most people, mainly indigenous people, do not attend health facilities, they only go when the disease is critical,” explains Juana Montoya, an inter-cultural health specialist from Ucayali.

Lastenia and her family, for example, did not go to the hospital when they became ill despite the seriousness of their condition. Health centers, she explains, had collapsed. “We all treated ourselves at home, using medicinal plants. I have known matico’s ibo for a long time, he has always lived with us [the indigenous people], he is like a man with a merciful face, he has the color of the earth because he is the protector of the indigenous people,” she says.

Although she is afraid of being infected again, the indigenous artist says she will not be immunized against Covid-19 until she receives adequate information on how the vaccine works. The same situation is repeated in several communities in the Amazon. For instance, as of July 12, only 392 indigenous people had been vaccinated out of the 47,622 people programmed in the Ucayali region, where the artist lives.

Pecon Quena says that every time she closes her eyes she sees the guardian of the coronavirus, trying to get close to her. “There come glowing spirits like flies that stick towards us. But they are not flies, but the owner of the disease.” That's why, she says, she continues to drink matico tea and strictly complies with sanitary measures.