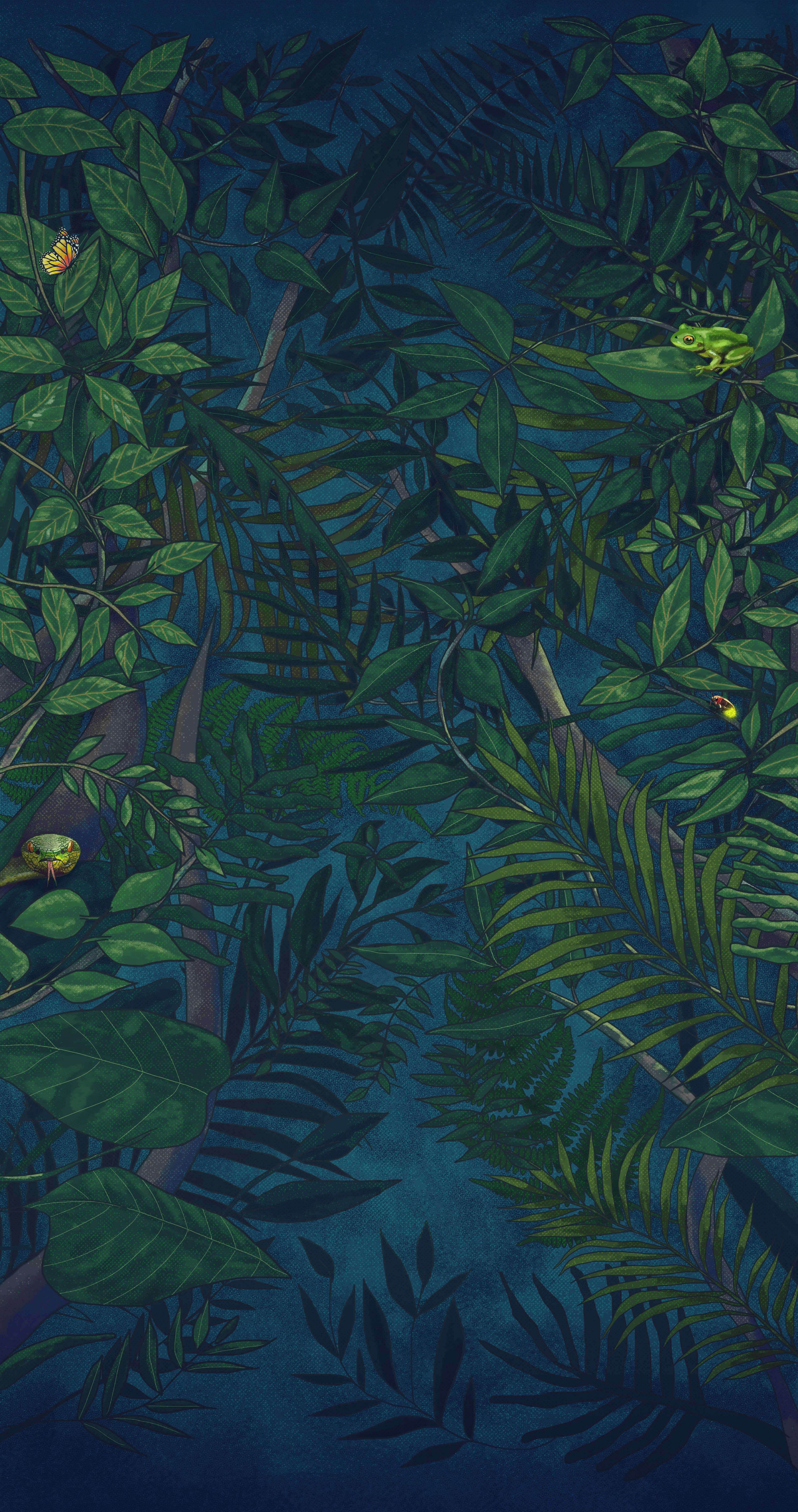 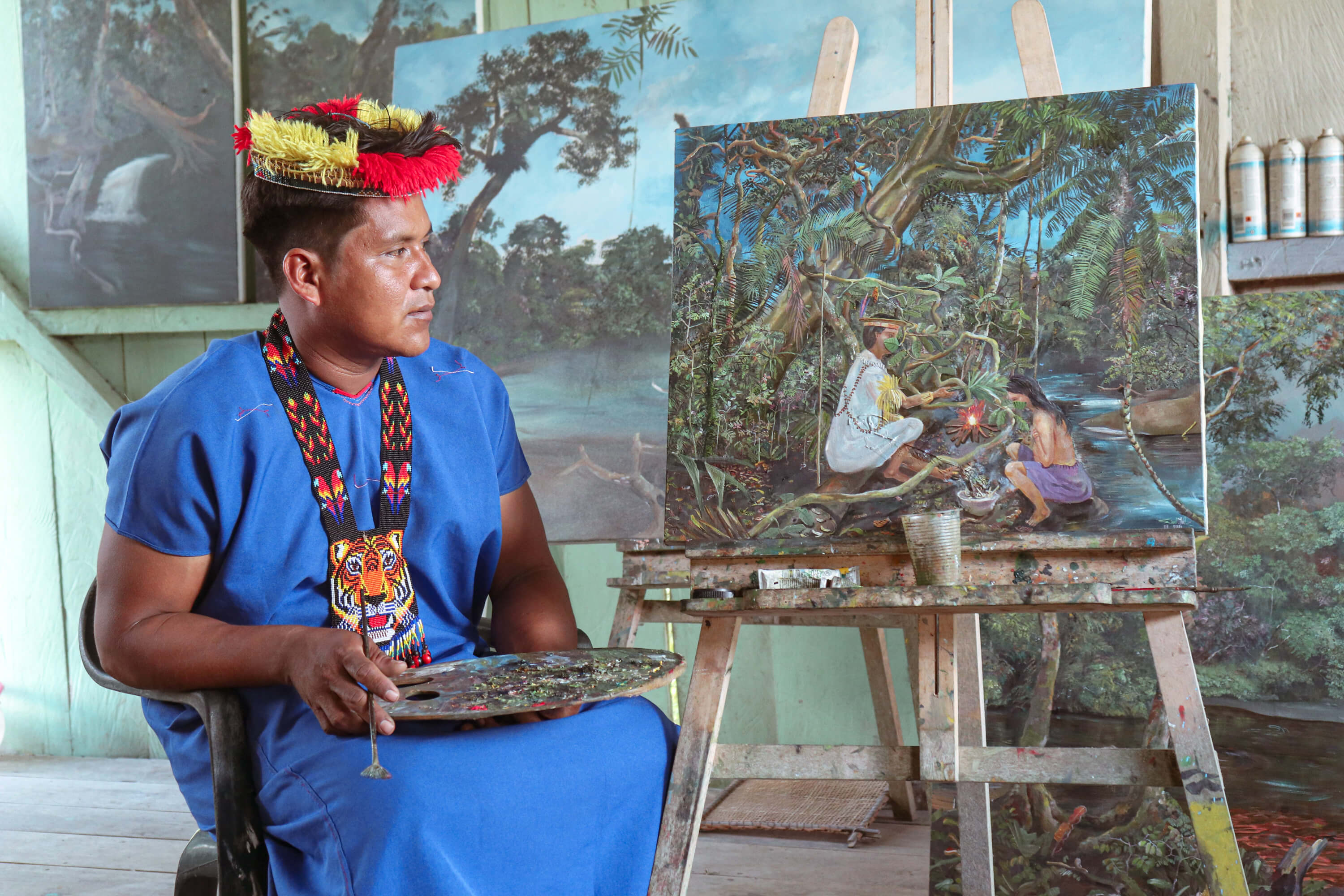 As one of the countries most affected by the pandemic, Ecuador had its communities retreating in isolation. But the virus reached them anyway. The Siekopai nation took its wisest members away; dreams and visions told them something evil would fall upon this border town next to Peru, they agreed to resist. Heir to a long tradition of Siekopai painters, indigenous artist Wilfrido Lusitande Piaguaje’s work portrays in his art this struggle and how wisdom coming from the plants helps them during this pandemic which, according to official estimates, has resulted in at least 30,770 people dead in this country.

The new virus devastated entire families around the world, and amongst indigenous peoples it also threatened the traditional knowledge transmitted by the elders, the wise men. Just when the pandemic hit, two elders of the Siekopai people died victims of the new disease in the Ecuadorian Amazon: Don Enrique Piaguaje and Belisario Payaguage. The first one was like a doctor for the community given his extensive knowledge about plants, while the second was the last connoisseur on how traditional houses, called malocas, are built. Both died in the Bellavista community, located in Sucumbíos. They were between 65 and 70 years old.

When the third patient, Professor Eduardo Payaguage, began to show breathing problems, they decided to send him to the hospital. He remained there for 20 days, but could’t resist. “When he returned to the community inside a box, we were shocked. I was mad. I said I don’t want to know anything about the health system. They only gave us paracetamol,” says Justino Piaguage, who at the time was the president of the nation and today is a leader of the territory. The fourth victim was Justino’s aunt. She was already sick, but he can’t tell exactly if the virus took her or if it worsened her condition.

With less than 740 inhabitants, these indigenous people—also known as the Siekopai—were the first Amazonian nation where the coronavirus arrived in Ecuador. It was the second week of April, 2021.

At the start of the pandemic, the Siekopai decided to send a group of families to a sacred place in the Amazon, called Lagartococha or Pëkëiya, a five-day canoe trip down the Aguarico River. “We sent those people because if something happened to us, the seed had to stay. Five families stayed there,” says Justino Piaguage. 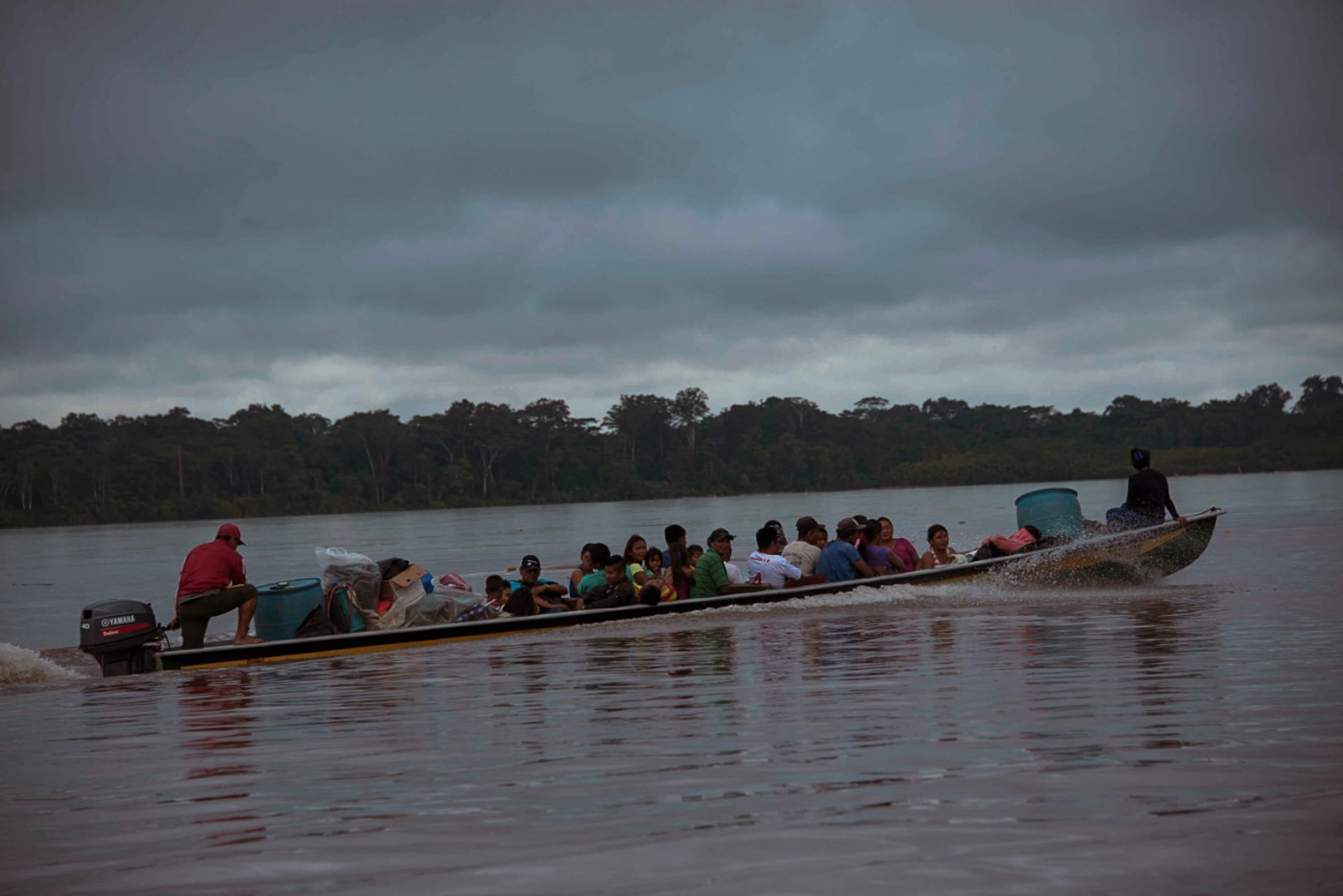 CROSS BORDER. The Siekopai, located in the Aguarico river basin, were the first Amazonian nationality where the coronavirus arrived in Ecuador. Photo: Manuel Pallares / Fundación Raíz

When the first cases of the new disease arrived, the community implemented its own safety measures. “We locked ourselves in and began to study the virus with the wisdom of our grandparents. I led the companions who know about the plants,” says Justino. Then we found the formula, we made the drinks with three plants. Then we began to add more.

Some are known, such as ginger–also known as “mountain garlic”–, which they call umucó, combined with other plants such as nuní, and amupajuró. This plant concentrate became their refuge against the coronavirus in the midst of a desolate context in Ecuador, when people began dying in the streets due to the collapse of hospitals. Faced with the Government’s abandonment, they relied on their knowledge of leaves and roots.

TThe beginnings of the pandemic were times marked by fear and uncertainty. “In the community, when a person was infected, they stayed at home, but that was going to be conflictive because that person was going to die of sadness. When we managed to figure out our medicine, we were already taking our own medicine,” Justino says. He believes he was one of the first people infected in the San Pablo de Katëtsiaya community, one of the six that make up the Siekopai nation in Ecuadorian territory. 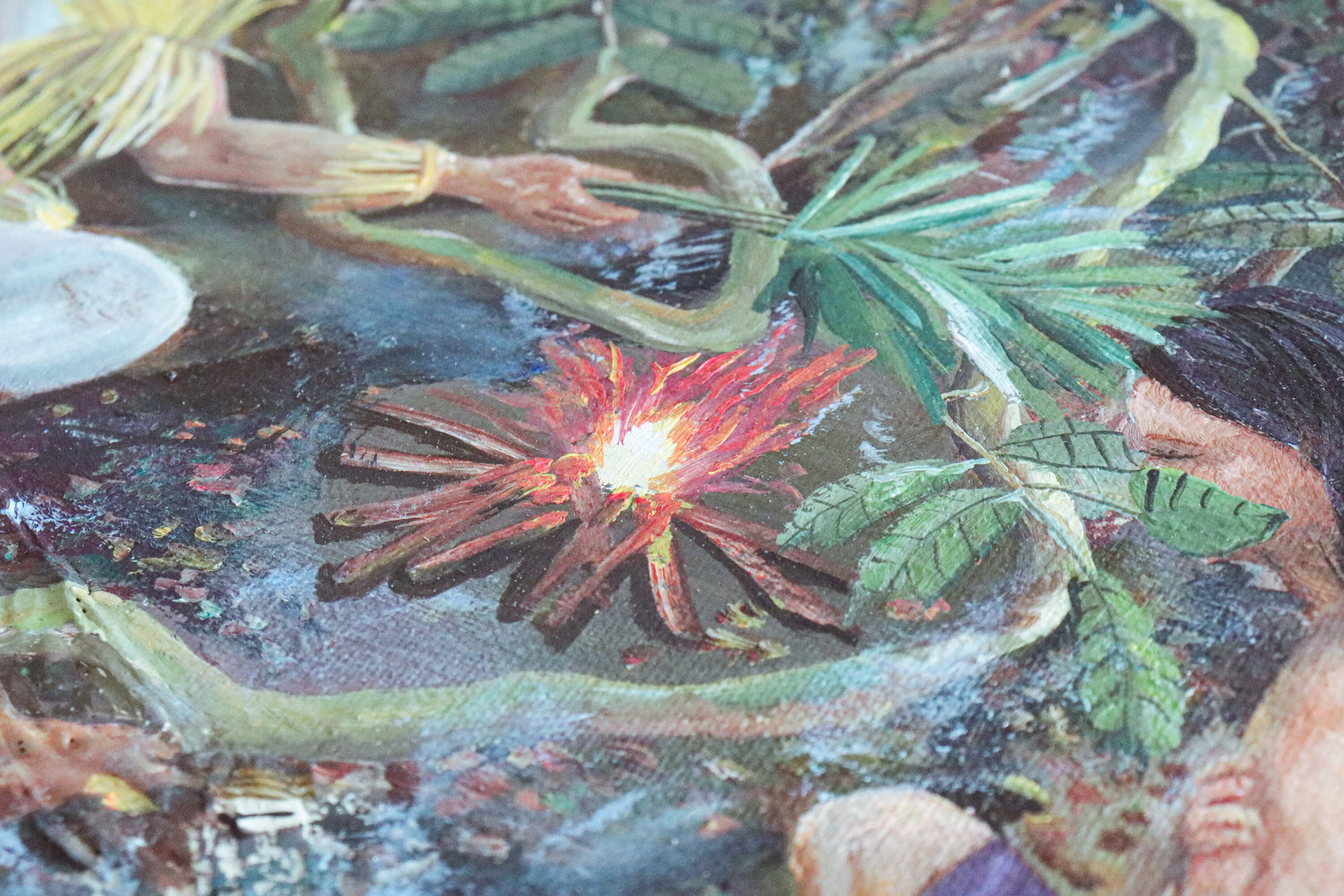 FIRE. Wilfrido Lusitande Piaguaje's painting of how they coped with the pandemic accurately details the uses of plants and the relationship with the forest of the Siekopai people.

One day, someone had a dream: the community caught fire, but a layer of protection covered its territory, “and then, the rays of fire no longer fell on our community,” he recalls and says the dream meant that “first, we will suffer and then we will have protection.” They took refuge in the seven traditional plants and used them as a protective shield. They also used a powder made of crushed leaves which they applied to people’s noses.

The vastness of these plants and the role of the wise Siekopais were reflected in the painting that artist Wilfrido Lusitande Piaguaje created for the journalistic series Visions of the Coronavirus. At 36 years old, he lives in the San Pablo de Katëtsiaya community, on the banks of the Aguarico River, with his wife Johana and their two daughters. OjoPúblico interviewed him in his community and joined him to sketch the piece accompanying this report.

In 2000, the United Nations organized a painting contest to choose a piece of work which portrayed the planet at the turn of the millennium. A Siekopai, Ramón Piaguaje, won the first place among 22,000 participants from 51 countries, with “Eternal Amazonia”. Since then, Piaguaje, who masters large formats with a hyper realistic vision and is self-taught, became a celebrity. The Siekopai nation has three painters from this school, whose reference is Ramon’s pioneering work. They are all related to him.

Wilfredo Lusitande Piaguaje started drawing as a child. “When I swam in the river bank, I draw a toucan bird on the ground. One day, they were giving drawing lessons for the people in here; in that workshop, at a maloca (house) were older people, even my dad drew a doll. It was the spirit of Yoko, a bejuco (beverage) prepared and drank at dawn. I was in school, and at that time I saw Ramón Piaguaje’s work, who had received a world prize. I wanted to have a painting just like that. That’s how I got the idea for how to paint.” For his ideas, he used pencils, pens, notebooks. “At school, the teachers talked to me, but a drawing teacher taught me how to mix colors to paint the sky. That gave me the idea,” he tells us.

The artist found his pictorial voice in a self-taught way. He says the source of his inspiration has a secret. “When I’m painting, I feel as if I were inside the jungle, standing inside the trees. I’m concentrated, thinking about how I can see, from where the plant is born, how it grows, how it develops, how the leaves are underneath; it comes to my mind, as if it were alive. The sounds, the crickets, the birds, then comes the idea of drawing what I can hear, a bird sings over there, I put it in the painting”. 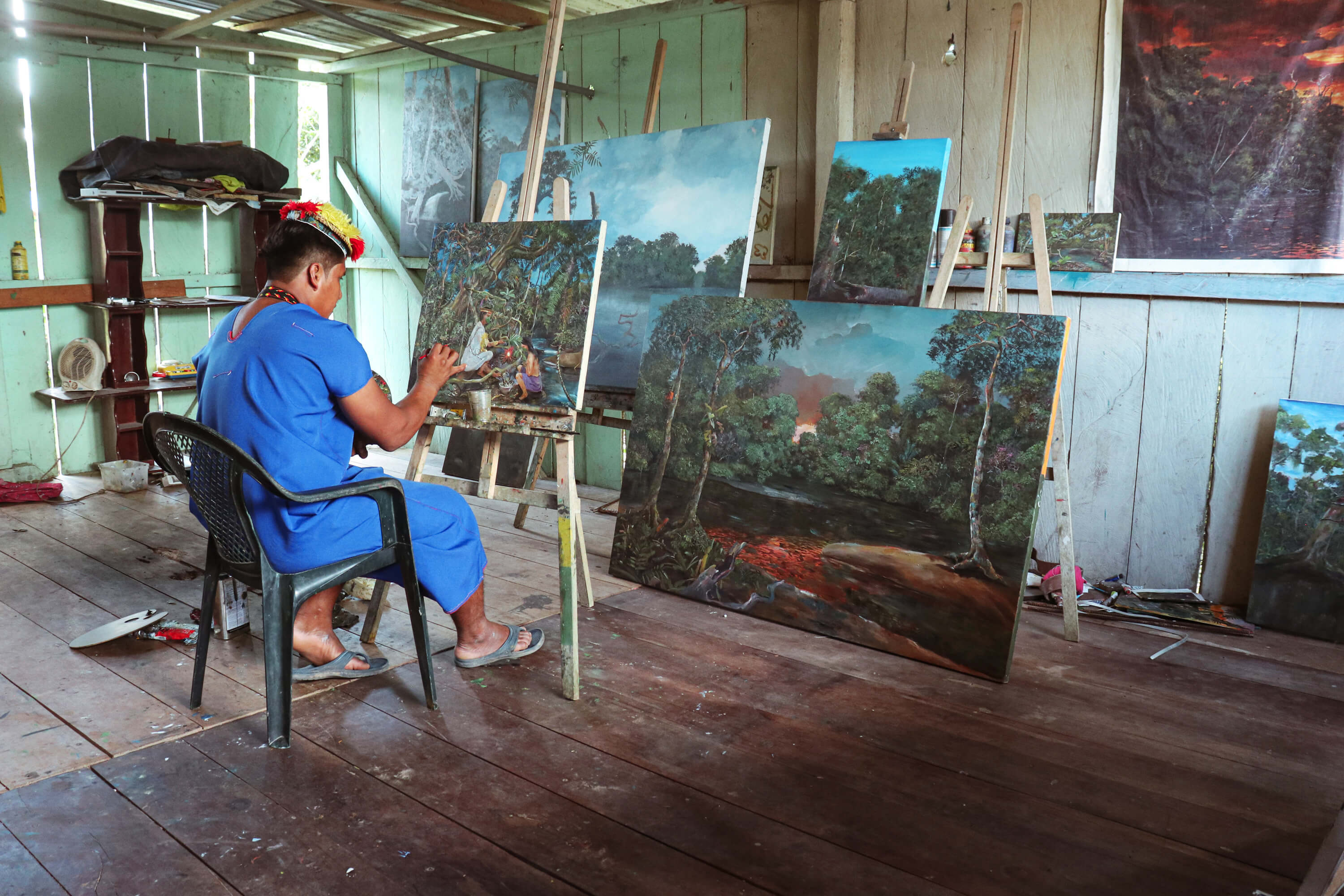 AGAINST THE PANDEMIC. Artist Wilfrido Lusitande draws and paints his people's relationship with the forests. He says that plants are like a protective and natural mask.

The new coronavirus and its threats shattered the quietness of the Amazonian communities. For this artistic project, Wilfrido shared his own vision of jungle plants, which he sees –he tells us– as a protective and natural mask. The image portrays the healer wearing the ritual dress of “the colored men” (as the Siekopai are called). He wears the crown on top of his head, adorned with drawings inspired by the effects of yagé (ayahuasca). He wears tiger teeth and seeds as ornaments. A cooking pot in the center contains some boiling plant juice. In front of him, somebody sits on the herbs and joins in silence a sort of religious ceremony.

“It’s the effect of plant medicine and the healing ritual of the spiritual part,” explains Manuel Pallares, a biologist and member of the Raíz-Caemba Foundation, which has been researching and working with this community in particular, for more than 20 years. According to the expert, Wilfrido Lusitande Piaguaje's paintings portray how much trust in traditional medicine there is. “When this virus arrived, we were not prepared. We believed that it was in another country, in another city, we were not prepared to face this invisible enemy,” says Wilfrido.

Separated by the war, united in the sacred lagoon

The Sekopay people belong to the western Tucano group. When the Jesuit missionaries arrived in the Amazon, they were called “Los Encabellados” (the long-haired), because of the care they gave to their long hair, explains Manuel Pallare.

They lived between the Napo and Putumayo rivers, on the border with Peru and Colombia, and during colonial times their population reached 16,000. But in the 16th century the new diseases introduced by the Europeans during the conquest decimated them. The families were grouped into different clans, which were later named Piaguaje, Piaguage, Payaguaje and others. There was a time when the remaining groups converged on the banks of the bordering Siekopae River, from which they took their name: “colored people” 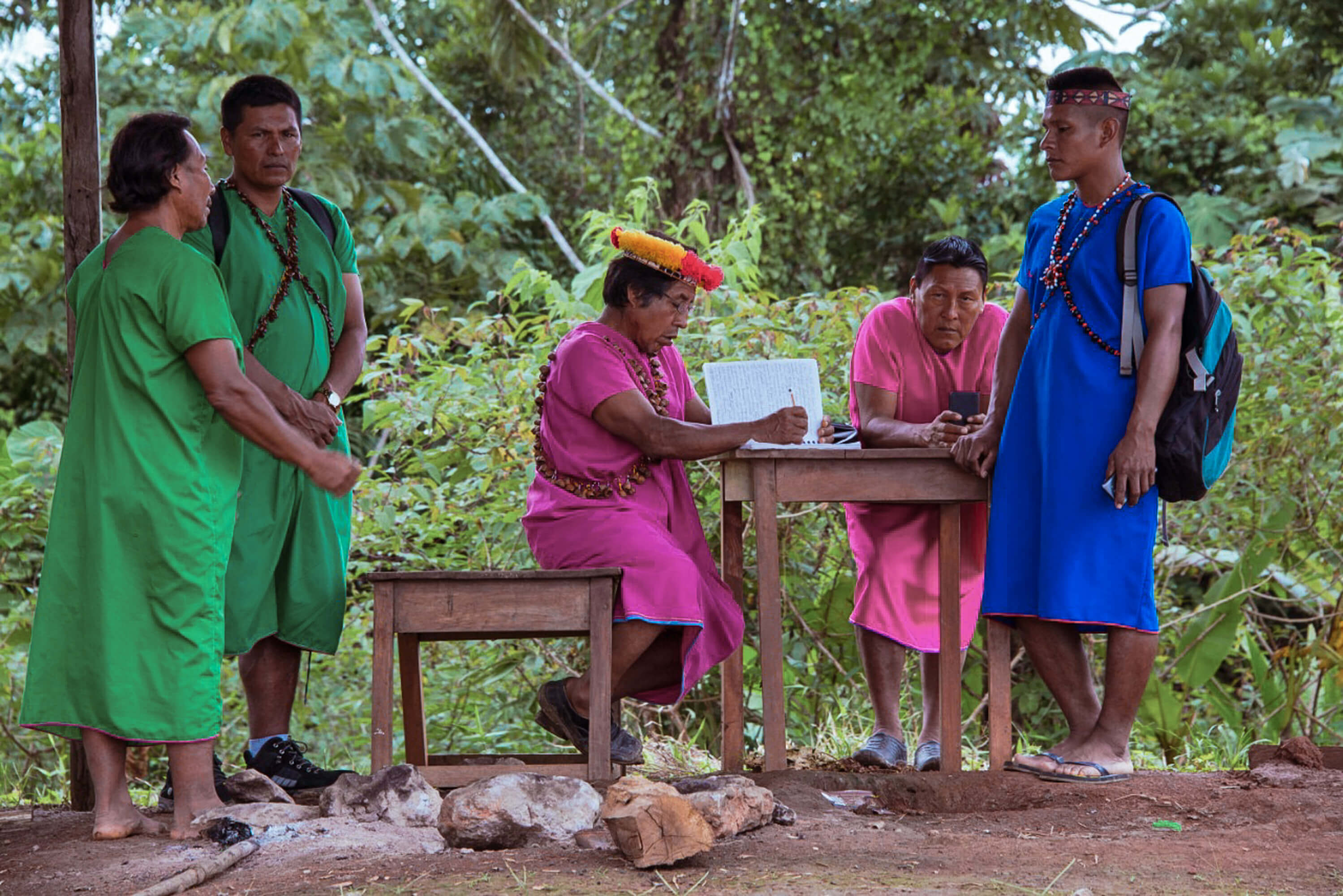 NO BORDERS. The Siekopai people lived along the Napo and Putumayo rivers, near to Peru and Colombia, but during the conquest their population was reduced by new diseases. Photo: Manuel Pallares / Fundación Raíz

At the turn of the 20th century, they were enslaved by settlers and migrants. History from those years tells us that Alejandro Payaguaje had a rift with their master, and then four families fled to the ravines for fear of reprisals. “They passed Lagartococha (at the border between Ecuador and Peru), found an abandoned boat and used it to enter the Cuyabeno, where they met Siona families, with whom they share the same language,” says biologist Manuel Pallare.

This group, from which Wilfrido Lusitande Piaguaje now descends, transited between the three Amazonian countries and settled in Ecuador a few months before the war of 1941. After that, they could only cross the border in hiding. Pallare explains that only after the 1998 peace agreement between Ecuador and Peru was it possible to organize the first reunion between the indigenous families that had been separated by the war.

The researcher, who knows the history of the Siekopai well, says that between 1941 and 1999 there were sporadic meetings of people who skirted the military detachments in order to see each other. “When we organized the first Ecuadorian-Peruvian Siekopai meeting, we saw a man who met a lady, both had a crush on each other when they were young, they were both alive, when they met again they were well over 70 years old, and stayed together,” he says. 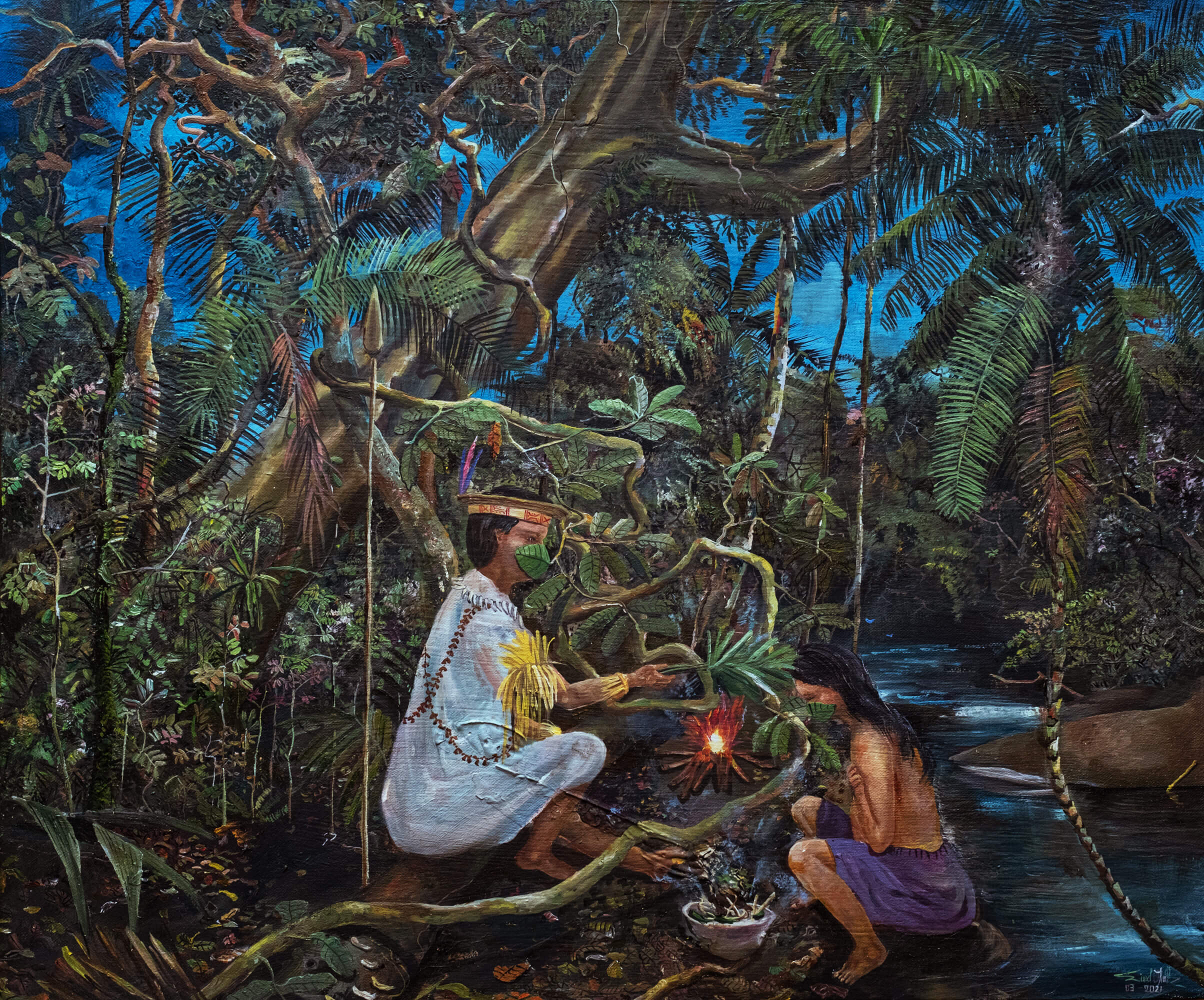 THE CALL FROM FOREST. Wilfrido Lusitande Piaguaje seeks answers in nature and plants. The painting of this journalistic series portrays that search, to face the new disease.

The Siekopai were the first indigenous people in Ecuador to become infected. A group of tourists arrived in Cuyabeno and in it was a passenger of Dutch origin with the new disease. This was one of the first reported cases of a patient with Covid-19 in Ecuador. Faced with the abandonment of the Government and the hundreds of dead people showing up in the streets and the hospitals, the community of Wilfrido Lusitande Piaguaje, as all the other Siekopai, took refuge in the plants.

The current president of the Siekopai nation, Elias Piyahuaje, addressed a letter on March 20 to one of the two candidates for the run-off presidential elections in Ecuador. In it, he denounces that his people live in extreme poverty and demands the recognition of their ancestral rights to the Lagartococha territories. They were displaced from these sacred lands during the war with Peru, and they identify Lagartococha as the place of origin of their people, the cradle of the yagé drinkers and the place where they connect with the water spirits. Wilfrido Lusitande Piaguaje expresses with his art the hope and wisdom of the plants during the pandemic, that until July 2021 has caused the death of at least 30,770 people in Ecuador, according to official figures.