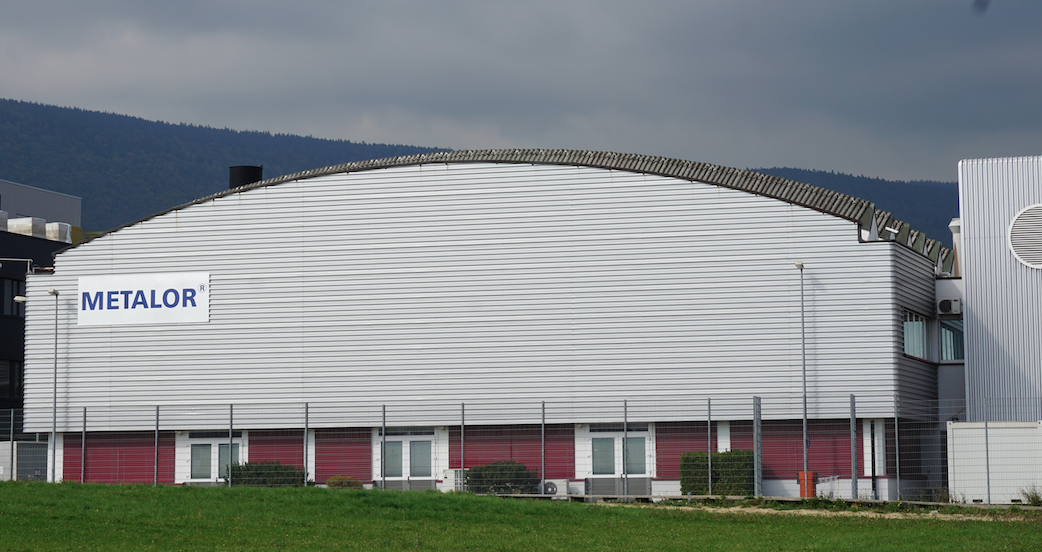 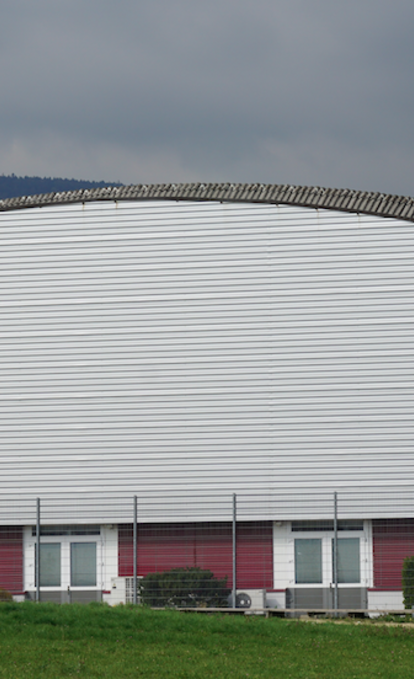 The investigation involves one of the world’s largest refiners in a case of organized crime and the laundering of money from illegal mining. The prosecutor&#039;s office requested legal assistance from its Swiss counterpart. In 2017 Peruvian and the US justice jailed those involved in the export of gold bars of suspicious origin to the North Texas Refinery (NTR).

Peru’s Public Prosecutor's Office has targeted the Swiss-based refinery Metalor Technologies in an alleged organized crime and illegal mining money laundering scheme over recent years to finance the purchase of tons of national gold of suspicious origin. The company is one of the largest of its kind in the world and a member of the London Bullion Market Association (LBMA), the organization that sets the metal’s price globally.

Ojo-Publico.com gained access to documents of the case in the Public Prosecutor’s Office and to other files of the Peruvian Superintendency of Customs and Tax Administration (SUNAT). The material reveals that the Swiss refiner, with subsidiaries in 16 countries in Asia, Europe, and the Americas, had already been mentioned in two previous illegal mining money laundering investigations against Peruvian export companies in Madre de Dios and Lima.

Over the last decade, Metalor Technologies has been accused by different civil society organizations and international media of purchasing tons of gold of allegedly suspicious origin in markets dominated by organized crime or armed conflicts in the Americas (Colombia and Peru) and Africa (Uganda and Ghana). In each case, the Swiss refiner has denied and rejected these accusations.

The investigation that involves Metalor is in the hands of the Second Supranational Prosecutor’s Office on Money Laundering and began on March 28, 2018, almost a year after SUNAT inspected 91 kilos of gold from the company’s principal Peruvian supplier: Minerals Sur (Minersur). The latter’s principal shareholder, Francisco Quintano Méndez, had previously (2000) changed his name from Francisco Quispe Mamani.

"Metalor is member of the London Bullion Market Association, the organization that sets the metal’s price globally"

This is the second case of a refinery involved in money laundering and organized crime in Peru. In 2015, Ojo-Publico.com revealed that the US Northern Texas Refinery (NTR) had purchased gold extracted illegally from the Amazon. Two years later the US justice system sentenced three senior NTR executives—Sammer Barrage, Juan Granda and Renato Rodríguez—and sought to extradite Pedro Pérez Miranda (alias Peter Ferrari), who is currently in prison and had been the company’s supplier in Lima. 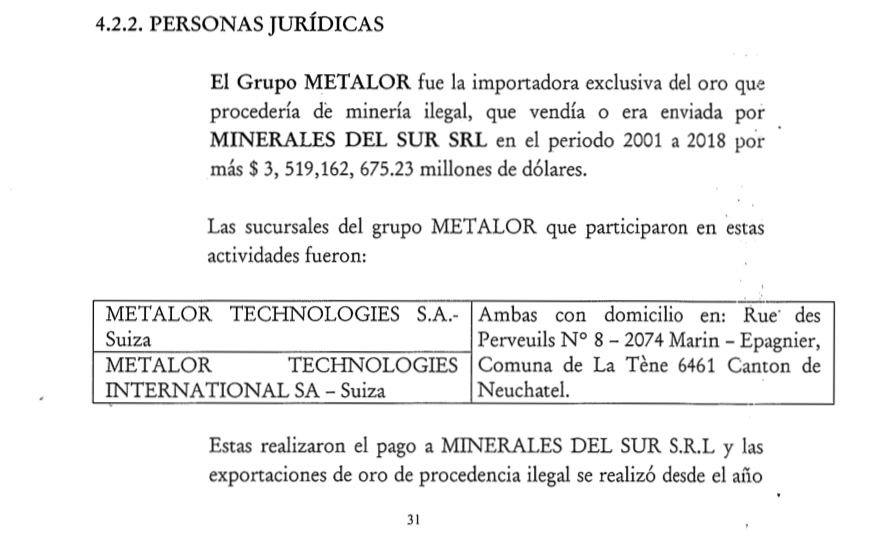 OFFICE OF THE NATIONAL PROSECUTOR. This office requested the seizure of 91 kilos of gold that were to reach Metalor in Switzerland. The judiciary has confirmed the order at the first and second levels.

Over the past years, Ojo-Publico.com has sought that Metalor respond specific questions about its history of gold suppliers in Peru, but it has always maintained the same reply: They refuse to acknowledge links with companies that had bought suspect ore. Meanwhile, employees and lawyers of Minerales del Sur denied  that they had acquired or sold gold from illicit origin during an interview conducted in 2018.

By press time, we had discovered that Peruvian money laundering prosecutors had requested that the International Cooperation Unit of the Public Prosecutors Office to contact Swiss tax authorities to obtain information about Metalor’s business in Peru. In 2015, two Callao prosecutor offices, who had been able to seize two cargoes of gold from Metalor’s suppliers, had also activated the same cooperation mechanisms with Swiss counterparts. The results are not yet known.

As part of investigations it is undertaking into Minersur of Puno, the Public Prosecutor’s Office has identified Metalor as a “purchaser of international gold” and for “encouraging supplier’s illicit conduct.” The documentation—based on the customs audit—includes the refiner in the “Criminal Organization” chapter and points to the company's branches in the United States and Switzerland.

The prosecutor’s document says: “The Metalor group was the exclusive importer of the gold produced from illegal mining which was sold or sent through Minersur during the period 2001 to 2018 for US$3.5 billion”. It also identifies the principal culprits: company CEO, Philippe Royer, a French national who left the company at the end of 2018; and Spanish national José Ramón Camino de Miguel, its general advisor since 2014. 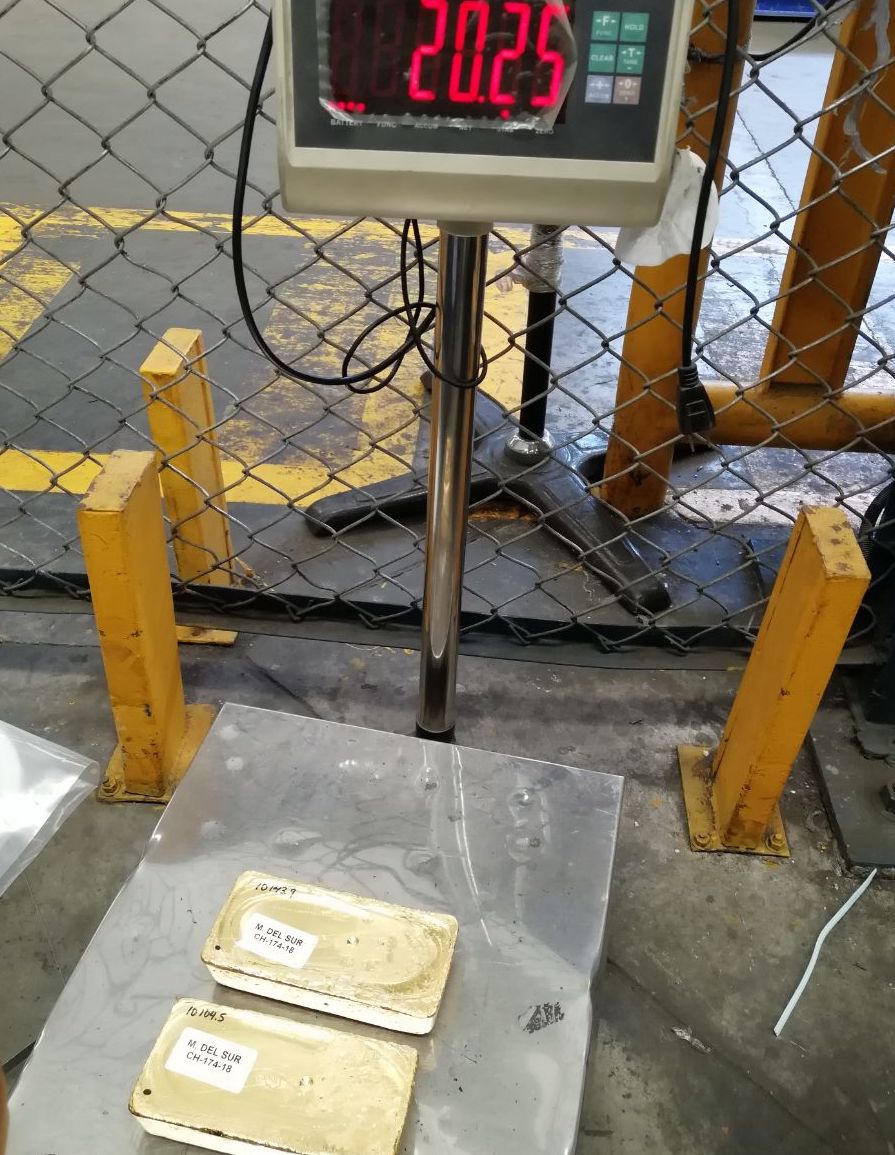 MARCH, 2018. Customs seized a cargo of gold bars that Minerales del Sur intended to export to Metalor Technologies of Switzerland.

The Public Ministry ordered the Money Laundering Division of the Peruvian National Police to participate in the investigations into Minersur. The process will include interrogation of Metalor´s legal representative and a financial and accounting audit of the cargoes of gold that the company has received over recent decades from Peruvian companies currently under investigation for money laundering.

“[Metalor] role is thought to be as a financier from overseas for the sale of gold ore of illegal origin,” says the Public Ministry’s report on the Swiss refiner, a company whose public statements boast its environmental certifications and claim that it buys clean gold produced in environments free of armed conflict, human rights violations, and other related illegal activities.

According to the prosecutor’s office, two subsidiaries of the refinery in Switzerland—Metalor Technologies S.A. and Metalor Technologies International S.A.—“paid Minerales del Sur [for] the export of gold of illegal origin (...) from 2001 to 2008.” The same Peruvian company “exported [suspect ore] to Metalor USA Refining Corporation [a third branch of the conglomerate in the United States] from 2001 to 2004.”

The prosecutors have also established that Metalor is a “limited company registered in 2000 in the Public Records of the Canton of Neuchatel [whose] corporate purpose is exploiting metals in Switzerland or overseas; financing its operational activities, and the precious metals operations of the group’s companies.” The file also shows the legal address of the refiner is “Rue des Perveuils 8-2074 Marin-Epagnier, Commune of La Tène, Canton of Neuchatel.”

The prosecution has also established that Minersur—whose owner Quintano Méndez heads the list of those investigated—has had companies as suppliers who are under investigation for acquiring suspicious ore. These include Sociedad Minera La Rinconada, of the Condori clan in Puno; and Inversur PJ & R and the D & J Ares Group, belonging to the Anara Labra sisters of Madre de Dios, both companies which have been legally implicated over recent years in the seizure of million-dollar sums of money. 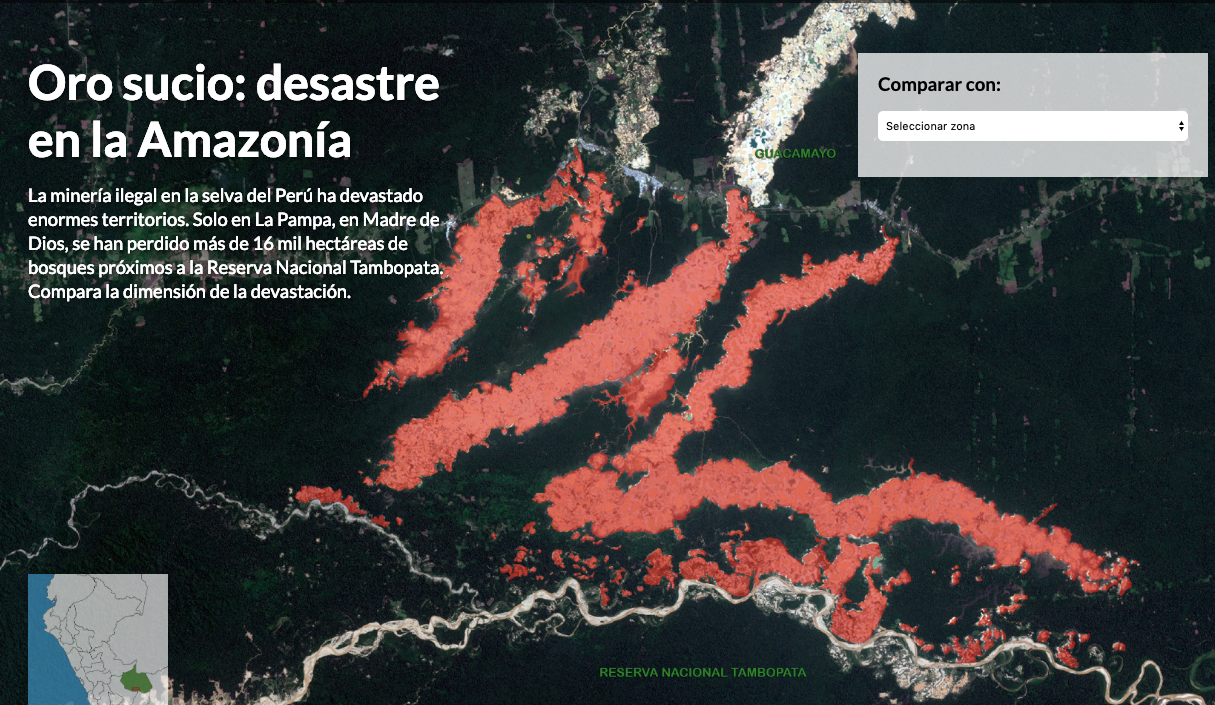 INTERACTIVE. Metalor purchased gold from companies that had their headquarters in Madre de Dios until investigations revealed links between some of their suppliers and laundering of illegal mining.

Ojo-Publico.com has also discovered that, as a natural person, the owner of Minersur sold ore for half a million soles between January and March 2018 to Veta de Oro del Peru, a company in Madre de Dios which is also under investigation for money laundering from illegal mining after Peruvian Customs seized 48 kilos of gold on April 27 last year in Callao. This company, directed by Sofía Béjar Giraldo, together with all its suppliers, are currently under investigation.

The Office of the Public Prosecutor has also made a preliminary finding that Minersur “was established in order to collect gold of illicit origin, legitimizing it using the name of a company authorized [by the State] to export it overseas, and attempting to hide the illegal origin of the money obtained.” Accordingly, the prosecutor's office included Minesur’s shareholders, accountants, and legal representatives in the investigation, before declaring the case complex, and extending it for 18 months from June 2018.

The gold business questioned in 2000

This statement is based on a reported lodged by prosecutors to SUNAT in 2000, in which they concluded that Minersur had been created in Puno in 1997 by a group of partners who, when questioned for this investigation, said they were unaware of the administrative arrangements of a company which years later would become the largest of Metalor’s gold suppliers. These same partners were brothers of Francisco Quintano Méndez, who officially joined the company in 2006 and is today under investigation for money laundering. 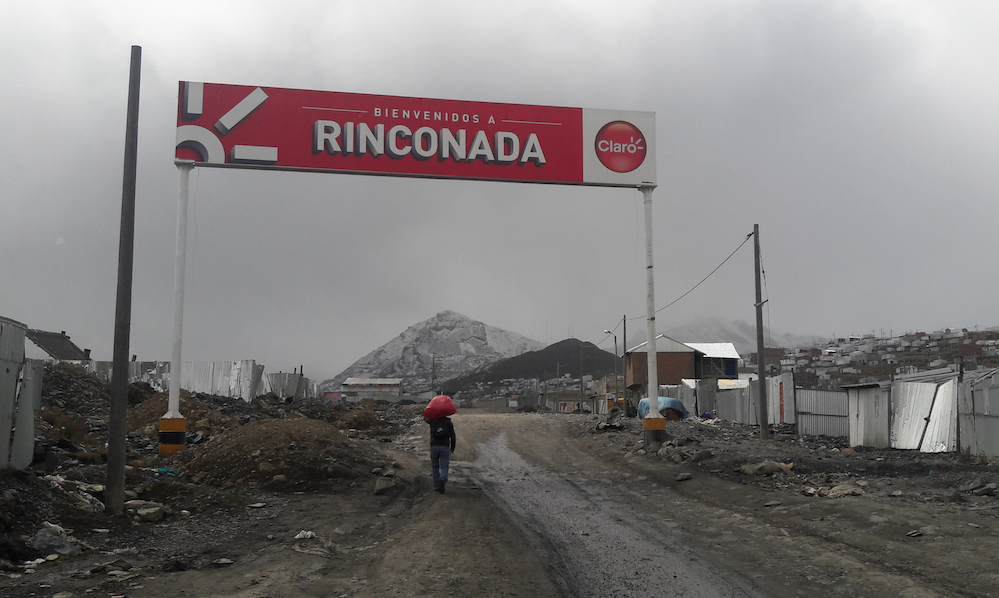 ANANEA. The entrance to La Rinconada, one of the largest mining centers of Puno, full of dumps and waste from this activity. Minerales del Sur has headquarters in this region which is located on the border with Bolivia at almost five thousands meters above sea level.

At that time, SUNAT was investigating Minersur on the presumption that it was a link in an extensive network of front companies in Lima, Puno and Madre de Dios that had been created to support non-existent gold purchase and sale operations, or to camouflage commercial transactions for ore extracted from illegal sites. The tax authority established that Minersur's gold suppliers were natural persons who either did not actually exist, or, who existed but who, when questioned, had displayed no knowledge of the company.

According to the 2000 SUNAT document: “Based on the statements of the partners of the company [Minersur], it can be established that neither they nor [their] legal representative know about its management (...) Reniec was asked to provide information on the identity documents of 100 suppliers of the taxpayer in order to locate them (...) and the following results were obtained… People whose electoral record number [identity document at the time] did not correspond to the indicated name, while others said they had never sold gold or did not live in the addresses [indicated].”

"In 2000, SUNAT was investigating Minersur on the presumption that it was a link in an extensive network of front companies"

Following the seizure of 91 kilos of gold in March 2018, Minersur has ceased its exports to Switzerland. The banking system has put the Puno company under the microscope after the Financial Intelligence Unit (FIU) initiated its own investigations into the case at the request of Customs Office in SUNAT, a body that is fighting a lone battle against the laundering of ore from illegal gold mining.

In 2015, Callao money laundering prosecutors requested international legal assistance from Switzerland on two occasions in regard to Metalor. The first was an investigation into Famyr Group, from which ten kilos of gold intended for export to the refiner were seized. The case was shelved. The second case involved the seizure of nine kilos of ore which the E&M Company of Madre de Dios had intended to send to the United States. It emerged that this exporter was one of Metalor’s major suppliers. The case is still pending. 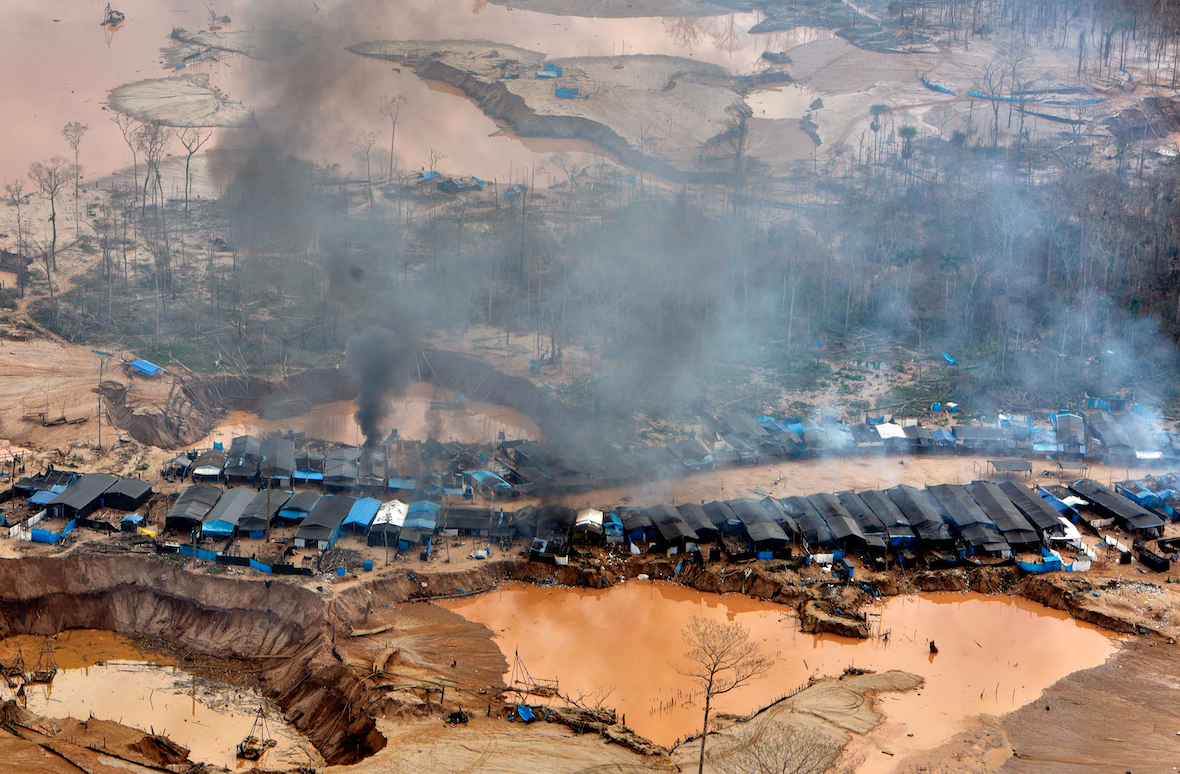 MERCURY OPERATION. The Peruvian State, through the Armed Forces and the Police, reinstated this year the fight against illegal mining in Madre de Dios. Customs had already been doing so since 2014, but targeting the largest exporters of illicit ore.

Photo: Ministry of the Interior.

The Swiss refiner operates in Lima through Gonzalo de Cossío de Asín, a Peruvian, and general manager of Metalor Technologies Peru. The company’s administrative office is located in Chorrillos at the headquarters of the Hermes secure transport company. SUNAT sources have revealed that, following the immobilization of the 91 kilos of gold in March of last year, this individual, together with Minersur’s lawyer Miryam Ponce Lavalle, visited the Customs headquarters in Callao to protest the decision.

Since then, the activities of Minersur of Puno have been aimed at halting the investigation and bringing the prosecutor who began the investigation, Edgar Pantigoso Zúñiga, before higher authorities. The company seeks to recover the bullion effectively seized in December 2018 by order of the National Criminal Court. These activities have been unsuccessful. At different levels, the National Criminal Court has revoked the seizure of the mineral destined for Switzerland.